Great Wratting is a village in Suffolk, in the hills of the south-west of the county close to the borders with Cambridgeshire and Essex. It is about four miles from Haverhill, and lies in the valley of the River Stour. There is a ford across the Stour in the centre of the village, where bathing and fishing are common pursuits. The river here is heavily populated by crayfish, a non native species long since escaped from farms near the mouth of the Stour.

The origins of the name of the village are uncertain. There is a Little Wratting nearby, and a West Wratting about ten miles away. Local historians assert that the village was known in the Dark Ages as Wræt Ing, meaning "Madder place"; the plant madder was in that age an important source for red dye. Others theories suggest the name originated in the process of candlemaking, where "wratting" refers to part of the process of preparing tallow. Often the suffix '-ing' refers to a clan, so "Wræt's kin". 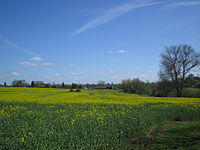 Red Field, looking towards the Street

Many of the older houses in the village were once estate cottages on the Thurlow Estate, sometime owned by the Vestey family, and date to the 16th century or earlier. A large proportion are thatched, mostly with traditional Suffolk straw thatch, but with some Norfolk reed thatch. The village boasts a vibrant and successful pub, the Red Lion, a thriving Anglican church, St Mary's, and a church room purchased by the village which is used for meetings and concerts. The old vicarage, the old school and the old post office are now - long since - family homes, as are the old forge (which has also been the old Bell pub). The village is well known for its large and hugely successful annual summer fete - held either at Great Wratting Hall or Rook Tree Farm on the first Saturday in June. A local silver band plays all afternoon and people attend from miles around. The village also has a well attended carol service and festival of readings on the Friday before Christmas. The flint walled church is Saxon in origin, its interior Victorian but with a wooden rood screen which was possibly put in by W H Smith of book-selling fame (once a resident of the Hall).

Great Wratting was mentioned in the Domesday Book.[1]

Great Wratting is one of the many places which lays claim to being the site of the battle where Boudica defeated the IXth Legion.[2]