Grantham is a market town in southern Lincolnshire, in Kesteven, of which it is the main town. Grantham bestrides the main routes north and south on the east side of the land, from London to Edinburgh, the historic Great North Road (the Roman Ermine street and now the A1), the East Coast Main Line railway and the River Witham. Grantham stands on the Witham downstream of the city of Lincoln 26 miles to the north.

The town lies in the low lands of Lincolnshire, west of the Lincoln Edge, so rises of ground are known. The old Great North Road cuts through the town but the A1 bypasses it to the west.

The town is best known as the birthplace of late Prime Minister Margaret Thatcher, and the place where Isaac Newton went to school.

The ancient Ermine Street and the Great North Road which followed it supplied Grantham with its early prosperity. Coming up the road, here was he scene of Oliver Cromwell's first advantage over Royalists during the English Civil War at Gonerby Moor.

The origin of the name "Grantham" is uncertain, though is said to probably be Old English language "Granta ham", meaning "Granta village", and appeared as early as 1086 in the Domesday Book in its present form of Grantham.[1] The Roman name for the river Witham is believed to have been "Granta".

The famed of Grantham

The house where Margaret Thatcher was born

Three world-famous people associated with the town are:

Late Neolithic vessels from a burial were found at Little Gonerby, in the north of the town, in 1875.[2] It is however only in the Middle Ages that the town’s history is much known.

In Grantham Queen Edith had 12 carucates to the geld. There is no arable land outside the vill. Queen Edith had a hall, and 2 carucates and land for 3 ploughs without geld. 111 burgesses. Ivo has 1 church and 4 mills rendering 12s and 8 acres of meadow without geld. The land of Bishop Osmond. In Londonthorpe ... is land for 2 ploughs. this land belongs to the church of Grantham. In Spittlegate St. Wulfram of Grantham has half a carucate of land to the geld. In Great Gonerby, St. Wulfram of Grantham has 1 carucate of land. there is land for 12 oxen.[3]

The town developed when the railway came to the town. The Nottingham line arrived first, then the London line.

Until the 1970s the housing estates west of the town centre were green fields. Green Hill on the A52 was well named, but no longer; the hill is occupied by a housing estate. 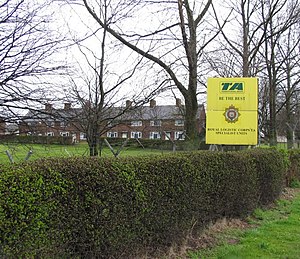 Army base by Grantham

During the famous Dams Buster Raids by the Royal Air Force in May 1943, the RAF Bomber Command's No. 5 Group and the operation HQ was in St Vincents,[4] a building which later housed a district council planning department. It was built by Richard Hornsby in 1865, lived in by Richard Hornsby's son, and is now a private house. In 1944 (including D-Day), this was the headquarters for the United States Army Air Forces's Ninth Air Force's IX Troop Carrier Command, being known as Grantham Lodge.[5] During the early part of the war Sir Arthur Harris, “Bomber Harris”, lived in the town.

RAF Spitalgate trained pilots during both world wars, initially as a Royal Flying Corps establishment, but has never been an operational fighter or bomber base; although it did see operational service during the 1943 invasion of Europe as a base for American and Polish gliders and parachutists. It officially closed in 1974. The WRAF had been there since 1960, and moved to RAF Hereford (now the home of the SAS).

The RAF Regiment was formed just north east of the town in parts of Londonthorpe and Harrowby Without during December 1941 with its headquarters at RAF Alma Park which is recognised as the birthplace of the Corps.[6] The Alma Park and Belton Park estates had jointly also been the training centre for the Machine Gun Corps from November 1915.[7] In total Harrowby Camp as it was known housed 18,000 men during First World War.

The RAF Regiment quickly grew to in excess of 66,000 personnel and during training they were housed at RAF Belton Park which was the Regiment's first depot, RAF Folkingham and RAF North Witham. The RAF Regiment stayed until August 1946, when they left for RAF Catterick.

Grantham is notable as being the first place in the world to recruit and train women police officers. Grantham was the first provincial force to ask the newly formed Women's Police Service to supply them with occasional policewomen, recognising them as particularly useful for dealing with women and juveniles. In 1915, Grantham magistrates swore in Mrs Edith Smith, making her the first proper policewoman in Britain with full powers of arrest.

Many traditions have taken place over the years, many of which have been forgotten. There is the Grantham Parade and the Grantham Festival both of which take place every year. There used to be an annual pig drive through the centre of the town until 1962, when it was deemed too dangerous; this tradition dated back to 1755, when pig farmers from the area used to move pigs to greener pastures.

The annual Kesteven Schools Speech and Drama Festival was held in the town.

The town is known for its Gingerbread biscuits, and the legend behind the invention of the biscuits takes us back to the old coaching days of the eighteenth century, when Grantham was on one of the main stagecoach routes.

Grantham was one of the stopping places of the Royal Mail Coach and while the horses were being changed at the George Hotel, passengers would stroll down the street and invariably purchase a supply of Grantham Whetstones, which were the first form of biscuits ever offered for sale. Then in 1740, a local tradesman, named William Egglestone, made an accidental discovery. In bygone days business premises were always closely shuttered and as part of Egglestone's business was that of a baker, he went into his shop one morning to procure the ingredients for making some cakes for his family's consumption but in the semi darkness of the shop, he mistook one ingredient for another and it was not until the cakes were baking that he discovered his mistake. The little cakes before being placed in the oven, were cut out with a wine glass and should have remained that size when baked, but instead of which they rose up and became nearly twice the size. Undaunted, he ventured to taste them, as also did members of his family and they were pronounced most excellent and of a very delicate flavour. Soon he was offering them for sale in his shop under the name of Grantham Gingerbreads. Their fame spread north and south of the Great North Road which soon spelt prosperity for Mr Egglestone whose recipe was passed to his successors, the present day Catlins whose premises still occupy the original shop erected on High Street in 1560. 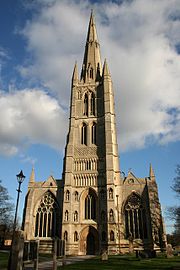 The main local landmark is the parish church of St Wulfram's, which has the sixth highest spire among English churches, standing at 282 feet. It is the tallest church in Lincolnshire after St James Church in Louth, and is also home to the country's first public library. In 1598, Francis Trigge, rector of Welbourn, gave £100 for a small library of books for the clergy and literate laity of Grantham. Two hundred and fifty of the original volumes remain and are kept in the parish church. From October 1974, the church was permanently floodlit at night.

Grantham House is to the east of the church, and a National Trust property.

Grantham is home to the country's only 'living' pub sign: a beehive of South African bees located outside since 1830.

Grantham was the site of an Eleanor Cross, erected by Edward I at each of the resting places of the body of his queen, following her death at Harby, as it was carried to London for burial in 1290. No trace of the cross remains, but it is thought that it stood near St Peters Hill. 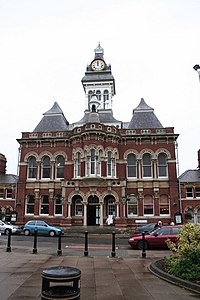 Edith Smith Way, the name of the road beside the Guildhall Arts Centre on St Peter's Hill, it is named after England's first policewoman. Miss Mary Allen and Miss Ellen F Harburn reported for duty on the 'beat' on 27 November 1914, during the First World War.[8] Mary Allen was a former suffragette and had been previously arrested outside the House of Commons and later went on to be the commandant of the UK's women's police force from the 1920s up to 1940. She helped to set up women's police forces in other countries, including Germany. Edith Smith became the first female with powers of arrest in August 1915.[9]

The Angel & Royal Hotel is one of Britain's oldest inns, dating from about 1200.[10] King John held court there in 1213, when the site was a hostel run by the Knights Templar. Richard III signed and sealed the death warrant of the Duke of Buckingham at the inn. Sandon Road is named after Viscount Sandon, who is also the Earl of Harrowby. The first person with this title was Dudley Ryder, 1st Earl of Harrowby, and a road is also named after him. He purchased Harrowby Hall in 1754. The current incumbent is Dudley Ryder, 8th Earl of Harrowby. 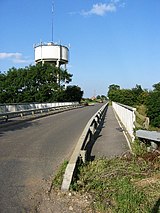 The water tower on Gorse Lane

The George Hotel nearby (known as St Peter's Place, now the George Shopping Centre) was mentioned in Charles Dickens's novel Nicholas Nickleby. Also in the town is the Blue Pig, one of many Blue pubs. Much of the town's property and industrial estates have been owned by Buckminster Trust Estates since the time of the Earl of Dysart.