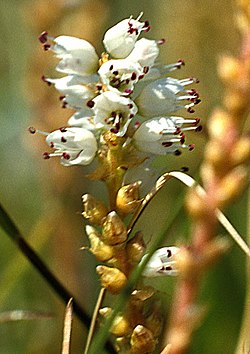 Grains o' th' Beck Meadows is a meadowland within the bleak moors of the Pennines, in the very north-west of Yorkshire. It is at the head of Lunedale, close to the hamlet from which it is named; Grains o' th' Beck.

The meadows constitute a Site of Special Scientific Interest.[1] It consists of three traditionally-managed hay meadows, all on the north bank of the River Lune, a little under four miles upstream of the Selset Reservoir dam. The site is enclosed by the Lune Forest SSSI.

The site is important as preserving a rich assemblage of plant species, including some that are locally rare, in a habitat that is widely threatened by intensive agricultural practices.

Each of the fields includes areas that are regularly cut for hay, steep banks that are left uncut, and areas of impeded drainage, which together contain a diversity of species. Alpine bistort, Polygonum viviparum, which is rare in the Pennines, is found on the steep banks, and marsh-marigold, Caltha palustris, is abundant in the wetter patches.