Difference between revisions of "Gosford, Oxfordshire"

Gosford is a village immediately south-east of Kidlington, Oxfordshire and running into it such that it is barely distinguishable from the larger village. The 2011 Census recorded Gosford and Water Eaton's combined parish population as 1,323.

In 1932 a secondary school, Kidlington Church of England Central School, was founded in Gosford.[2] It is now Gosford Hill School. 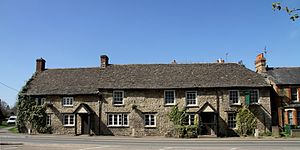 Gosford has also a supermarket with a filling station.