Difference between revisions of "Godstow"

Godstow is a hamlet about two and a half miles north-west of the centre of Oxford. It stands on the Oxfordshire bank of the River Thames between the villages of Wolvercote to the east and Wytham (across the river in Berkshire) to the west.

The ruins of Godstow Abbey, also known as Godstow Nunnery, are here.[1][2] Godstow Bridge spans the Thames here and famed the Trout Inn stands at the foot of the bridge across the river from the abbey ruins. There is also a weir and Godstow Lock.

Godstow Abbey was built here by the river, starting in 1133. It housed an order of Benedictine nuns. Rosamund Clifford, the mistress of King Henry II, retired here and died at 30. Her grave is somewhere in the grounds but now lost. The abbey was suppressed in 1539 under the Second Act of Dissolution.

The abbey was then converted into Godstow House by George Owen. It was occupied by his family until 1645, when the building was badly damaged in the Civil War. After this damage, the building fell into disrepair and was used by the locals as a source of stone for their buildings.

This stone bridge was in existence in 1692 and an earlier one was probably that held by the Royalists against Parliamentarians in 1644, during the Civil War.[3] Godstow House itself was fortified as part of the defences of Royalist Oxford against the Parliamentary army at the Siege of Oxford.[4]

By the Thames at Lower Wolvercote and Godstow is a 17th-century public house, The Trout Inn,[5] close to Godstow Bridge. The bridge, in two spans, was built in 1792, the southern span being rebuilt in 1892. Godstow Lock was built here in 1790.

In Victorian times, Charles Dodgson (who wrote as Lewis Carroll) brought Alice Liddell and her sisters, Edith and Lorina, for river trips and picnics at Godstow,[6] from which arose his book Alice in Wonderland.

The ruins of Godstow Abbey were used as a backdrop in the film Mamma Mia! Here We Go Again during the musical number "When I Kissed The Teacher".[7] 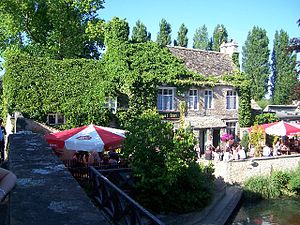