The GWSR has restored and reopened 12 miles of line, operating between Cheltenham Racecourse and the site of Laverton Halt. The company is currently raising £1.5 million to extend three miles northwards to Broadway, and will eventually begin working on plans to extend a further six miles to Honeybourne (where an island platform has since been rebuilt).

The line was originally part of the Great Western Railway's Cheltenham–Stratford-upon-Avon–Birmingham line, known as the Honeybourne Line, built in 1900–1906, and runs through the Cotswold towns of Winchcombe and Bishop's Cleeve.[1] The line was run down over the years and finally closed after a derailment damaged a stretch of track in 1976. The double track was lifted from 1979.

The preservation group rehabilitated the line, starting steam train operations at Toddington in 1984 over 700 yards of re-laid track. In 1987 the line was restored as far as Winchcombe where the station was reconstructed using the former Monmouth Troy station building. The railway continued to re-lay track west of Winchcombe, through the 693 yard long Greet Tunnel, and past the villages of Gretton, Gotherington and Bishop's Cleeve.[2] This culminated in the reopening of the line to Cheltenham Racecourse in 2003, by Princess Anne.

The GWSR runs trains from March to the end of December,[3] with the line closing during January and February for line and locomotive maintenance. The GWSR runs regular train services every weekend and most weekdays during the summer, and some weekends are used to host special events including steam and diesel galas, Day out with Thomas events, race trains and Santa Specials.

The railway operates a wide variety of both steam and heritage diesel locomotives, as well as heritage DMUs. These have included the world-famous locomotive 4472 "Flying Scotsman" and equally famous 3440 "City of Truro", which in 1904 was the first engine to reach 100 mph. In 2013 the resident steam locomotives were ex-GWR 'Modified Hall' Class no.7903 'Foremarke Hall', ex-GWR '28XX' Class no.2807 and an LMS-designed '8F' Class which has been repatriated after a lifetime working in Turkey. To complement the running stock a collection of over 210 carriages and wagons of various origins has been compiled, many of which are still being restored.

Signalling of the Heritage GWSR

The route consists of single line sections with passing places at the major stations. All stations and loops are signalled using GWR Lower Quadrant Semaphore Signals.[4][5]

The signalling on the line is a mixture of Electric Key Token and One Train Staff working, depending on operational requirements. Current sections are:

There are four signal boxes on the line, and a new platform mounted one at Broadway is under construction, with the frame parts all acquired and assembled:

Major works are focused on raising £500,000 of funds to allow the refurbishment of five bridges, thus allowing a further line extension northwards to Broadway by 2018. After receiving planning permission for the reconstruction of Broadway station to a similar plan to the previously demolished original, construction of both platforms is nearing completion (Autumn 2013), with signal box construction having started in January 2014. In early November 2014 80 Lengths of 60ft flat bottomed rail were delivered to the railway to lay track as far as the next bridge recently repaired thanks to the share offer at Little Bucklands, equating to approximately half a mile beyond the current railhead at Laverton.[6] 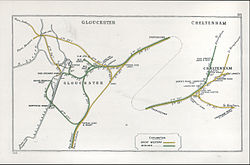 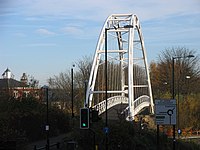 Encouraged by support from Cheltenham Town Council, who have given both the railway direct funds as well as placing protected status on the former lines trackbed south from Cheltenham Racecourse to Cheltenham Spa, the railway could at some point connect to Network Rail in the south.

The Council have backed the long term scheme, as this would allow the railway to:

Although the GWSR has extended track to its present ownership point one mile south of Cheltenham Racecourse station (via Hunting Butts tunnel), as far as the Prince of Wales stadium at Wyman's Brook, major and costly engineering works would be required to extend the trackbed further south.

The primary impediment is a bowstring bridge (located at 51°54’9"N, 2°5’11"W), built in 2002 to allow continued access by bicycle along the old track bed alignment to Cheltenham Leisure Centre. When planning permission was given for the redevelopment of the former Cheltenham Spa St James station site as a Waitrose supermarket in 2002,[8] a condition was imposed that the developer construct a new pedestrian bridge to ensure continued access to the remaining trackbed.[9] The resulting bowstring bridge follows a section of former railway embankment, which was removed to provide road access to the new store.[10]

In the early 2010s the GWSR was affected by two major landslips in embankments on the line, which cut it into separate sections; however, both slips have now been repaired, and the line has been fully re-opened.

In April 2010 the GWSR suffered a landslip of an embankment near Gotherington.[11] Train services continued despite the Gotherington landslip, but over a reduced route. The landslip forced the closure of the line south of Gotherington, including Cheltenham Racecourse Station, which was effectively cut off. The railway continued to operate services from Toddington to Gotherington, with a locomotive at both ends of the train ("top and tailed"), as it was not possible to run the locomotive around the train at Gotherington at the time (there is now a run round loop just south of Gotherington). The railway launched a £1 million appeal, both to fund the rebuilding of the embankment, and also to undertake preventative maintenance to ensure that similar problems do not happen at other points along the line. It was deemed unlikely that the line south of Gotherington would re-open before July 2011, but donations ensured that the work could be carried out promptly, and it was re-opened on 22 April 2011.

In January 2011 the railway was damaged by another landslip just east of Winchcombe station at Chicken Curve. The landslip severed the railway in two; it was very similar to the one at Gotherington, but closer to the middle of the route. It was estimated that the cost of the repair work would be £850,000; funds for the repair were successfully raised. During the repair period a DMU service was run from Toddington up to the extension at Laverton; since the earlier Gotherington slip had been repaired, steam trains ran from Winchcombe to Cheltenham Racecourse, the steam locomotive maintenance facilities temporarily being transferred to Winchcombe. The Chicken Curve landslip was repaired over the summer of 2012, and the GWSR is once again operational as a single unified line from Cheltenham Racecourse to the site of Laverton Halt, a total of 12 route miles in length.

Operational coaches are shown in bold.