The County of Gloucester is a shire in the south-west of Great Britain, lying between the Midlands and the West Country. The county falls naturally into three parts; the Forest of Dean in the west, the Cotswold Hills in he east and the flat, fertile valley of the lower River Severn which lies between them.

Gloucestershire has borders with eight other counties; Monmouthshire to the west, Herefordshire, Worcestershire and Warwickshire to the north, Oxfordshire and Berkshire to the east (the latter boundary a bare mile and a half long at Buscot), then Wiltshire and Somerset to the south. The westernmost part of the boundary with Somerset follows the lower reaches of the River Avon through the middle of Bristol, and its old course, the Floating Harbour.

Symbols of the county 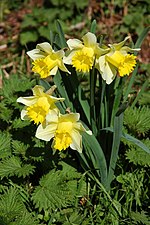 Wild Daffodils growing in the Forest of Dean

In 2002 the charity Plantlife chose the Wild Daffodil as the county flower of Gloucestershire.[1]

The Forest of Dean lies between the Severn Valley and the Monmouthshire border. It is considered to be the land in a plateau bounded by the River Wye, the River Severn and approaching the City of Gloucester to the east.

The area has some 42 square miles of mixed woodland, one of the surviving ancient woodlands in Britain. A large area was reserved for royal hunting before 1066, and it remained the largest Crown forest in England after the New Forest. It has no sizable towns.

The River Severn, the longest river in the British Isles, rises in Montgomeryshire and flows through Shropshire and Worcestershire before reaching Gloucestershire, by which time it is a broad river. It has created a broad, fertile valley, at its greatest extent in Gloucestershire. The River is tidal below Gloucester, which serves as a port.

The Severn Valley in Gloucestershire is broad and green. As the river opens into an estuary which becomes the Bristol Channel, Gloucestershire holds both banks as far as the River Wye enters it. The main towns in this part of the county are Tewkesbury, Cheltenham, Gloucester, Stroud (at the edge of the Cotswolds) and Bristol.

The Cotswold Hills extend into Gloucestershire, Oxfordshire and Warwickshire but the greatest part is in Gloucestershire, filling the eastern half of the county. Indeed, this part was once Winchcombeshire, a county which first appears in writing in 1007 and then in 1016 it was ended by Earl Edric Streona, joined to Gloucestershire.[2].

The only large town in this part of the shire is Cirencester. In the depths of the Cotswolds the main towns are very modest; Stow-on-the-Wold, Moreton-in-Marsh and Winchcombe. The Cotswolds are however dotted with many villages. 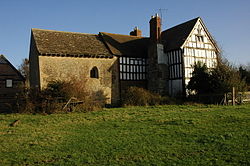 The Romans knew Gloucester as Glevum, and in Mediæval Welsh romances it is Caerloyw (indeed in modern Welsh the city is Caerloyw). Another Roman centre was Corinium; Cirencester. In the final quarter of the 6th century the West Saxons established control over the area, a conquest which began with the victory of King Ceawlin at Deorham (Dyrham), swiftly followed by the capture of Cirencester, Gloucester and Bath. The Hwicce who occupied the district were a West Saxon tribe but some scholars say they were a mixed Welsh-English people who apparently retained their British Christianity to the time of the mission of St Augustine.

Gloucestershire itself appeared in the early 10th century but is first mentioned by name in the Anglo-Saxon Chronicle in 1016, the year it absorbed Winchcombeshire.

After the Norman Conquest, extensive lands and privileges in the county were acquired by the church, the Abbey of Cirencester alone holding seven hundreds at fee-farm, and the estates of the principal lay-tenants were for the most part outlying parcels of baronies having their caput in other counties. The large estates held by William Fitz Osbern, Earl of Hereford, escheated to the crown on the rebellion of his son Earl Roger in 1074. The Berkeleys have held lands in Gloucestershire from the time of the Domesday Survey, and the families of Basset, Tracy, Clifton, Dennis and Poyntz have figured prominently in the annals of the county. Gilbert de Clare, Earl of Gloucester, and Richard of Cornwall claimed extensive lands and privileges in the shire in the 13th century, and Simon de Montfort owned Minsterworth and Rodley.

In the Anarchy of King Stephen's reign, the cause of the Empress Matilda was supported by her half brother, Robert, 1st Earl of Gloucester, who had rebuilt the castle at Bristol. The castles at Gloucester and Cirencester were also garrisoned on her behalf. Beverston Castle was also a site of the Stephen Matilda conflict.

In the Second Barons' War of the reign of Henry III, Gloucester was garrisoned for Simon de Montfort, but was captured by Prince Edward in 1265, in which year de Montfort was slain at Evesham. Bristol and Gloucester actively supported the Yorkist cause during the Wars of the Roses.

The 16th century Reformation took strong hold in Gloucester and in the reign of Mary I, Bishop Hooper was sent to Gloucester to be burnt as a warning to the county.

The same Puritan leanings induced the county to support the Parliamentary cause in the English Civil War of the 17th century. In 1643 Bristol and Cirencester were captured by the Royalists, but the latter was recovered in the same year and Bristol in 1645. Two Civil War battles were fought at Beverston Castle, and Parliament ordered its battlements destroyed to deprive the Royalists use of the fortress. Gloucester was garrisoned for the Parliament throughout the struggle.

In July 2007, Gloucestershire suffered the worst flooding in recorded British history, with tens of thousands of residents affected. The RAF conducted the largest peace-time domestic operation in its history to rescue over 120 residents from flood affected areas. The damage was estimated at over 2000 million pounds.[3] The county recovered rapidly from the disaster, investing in attracting tourists to visit the many sites and diverse range of shops in the area. 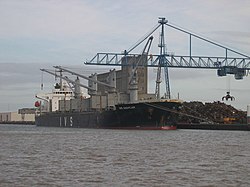 The physical characteristics of the three natural divisions of Gloucestershire have given rise in each to a special industry, as already indicated. The forest district, until the development of the Sussex mines in the 16th century, was the chief iron-producing area of the kingdom, the mines having been worked in Roman times, while the abundance of timber gave rise to numerous tanneries and to an important shipbuilding trade. The hill district, besides fostering agricultural pursuits, gradually absorbed the woollen trade from the big towns, which now devoted themselves almost entirely to foreign commerce. Silk-weaving was introduced in the 17th century, and was especially prosperous in the Stroud valley. The abundance of clay and building-stone in the county gave rise to considerable manufactures of brick, tiles and pottery. Numerous minor industries sprang up in the 17th and 18th centuries, such as flax-growing and the manufacture of pins, buttons, lace, stockings, rope and sailcloth.

Bristol has always been a place apart. At the very southern edge of Gloucestershire and spilling over into Somerset, Bristol sits close to the Bristol Channel and has thrived as a port since Anglo-Saxon times. In the Middle Ages, Bristol was the major port of the west coast, and even today, when trade has ceased to sail upriver to the city itself, Bristol’s own dependent port, Avonmouth is one of the greatest trading and industrial ports in the land.

Glories of the past and present 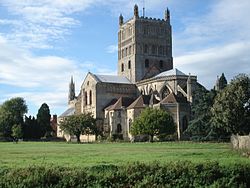 Gloucester Cathedral and Bristol Cathedral, Tewkesbury Abbey, and the church of Cirencester with its great Perpendicular porch, are historic buildings of Gloucestershire and all three are active churches.

Of Hailes Abbey near Winchcombe, founded by Richard, Earl of Cornwall, in 1246, little more than the foundations are left, but these have been excavated with great care, and interesting fragments have been brought to light.

Memorials of the de la Bere family appear in the church at Cleeve. The mansion contains a tiled floor from Hailes Abbey. Near Winchcomb is Sudeley Castle, dating from the 15th century, but the inhabited portion is chiefly Elizabethan. The chapel is the burial place of Queen Catherine Parr. At Great Badminton is the mansion and vast domain of the Beauforts (formerly of the Botelers and others), on the south-eastern edge of the county. 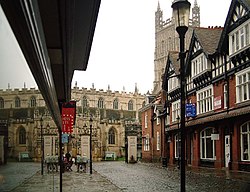 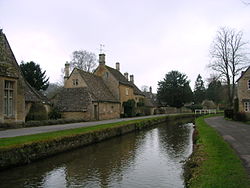 The cathedral of Gloucester, the magnificent abbey church of Tewkesbury, and the church of Cirencester with its great Perpendicular porch, are described under their separate headings. Of the abbey of Hailes near Winchcombe, founded by Richard, Earl of Cornwall, in 1246, little more than the foundations are left, but these have been excavated and interesting fragments have been brought to light. 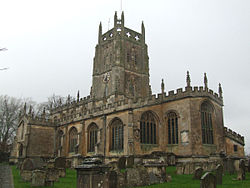 Most of the old market towns have fine parish churches. At Deerhurst near Tewkesbury, and Bishop's Cleeve near Cheltenham, there are churches of special interest on account of the pre-Norman work they retain. The Perpendicular church at Lechlade is unusually perfect; and that at Fairford was built (c. 1500), according to tradition, to contain the remarkable series of stained-glass windows which are said to have been brought from the Netherlands. These are, however, adjudged to be of English workmanship, and are one of the finest series in the country.

Berkeley Castle is a splendid example of a feudal stronghold. Calcot Barn is an interesting relic of Kingswood Abbey. Thornbury Castle is a Tudor country house, the pretensions of which evoked the jealousy of Cardinal Wolsey against its builder, Edward Stafford, duke of Buckingham, who was beheaded in 1521. Near Cheltenham stands the fine 15th-century mansion of Southam de la Bere, of timber and stone. Memorials of the de la Bere family appear in the church at Cleeve. The mansion contains a tiled floor from Hailes Abbey. At Great Badminton is the mansion and vast domain of the Beauforts (formerly of the Botelers and others), on the south-eastern border of the county. At Owlpen is one of the most picturesque Tudor manor houses set in a densely-wooded valley.

The Cotswold Olimpick Games were founded in 1612 at Chipping Campden in Gloucestershire and held until 1642. Revived as a local celebration in at the Restoration 1660 they continued rather out of the athletic ideal in which they had been founded up until 1852. Revived again in 1966, the Games continue to be held each year in Chipping Campden.

Things to see in Gloucestershire

Places of interest in Gloucestershire include: