Freshford is a village in County Kilkenny, in the Barony of Crannagh.

Towards the end of the 8th century the Ui Duach were driven out and the Ui Bairche reigned again. Then in 836 the Vikings arrived and in one daring raid burnt the Church of St Lachtain. In 1026 the Ui Bairche were defeated by the Leixians and soon after were replaced as chieftains by the O'Braonains, who in turn were forced back towards Castlecomer by the arrival of the Normans.

In the year 1111, a synod of bishops, was held at Rathbrasall, County Tipperary, which divided Ireland into dioceses. All small dioceses disappeared and Freshford became part of the diocese of Kilkenny, Laois and Offaly.

In 1169 a major battle was fought near Freshford when Dermot McMurrough and his Norman allies defeated Domhnall McGiolla Padraig of Ossory at the pass of Achadh Úr following a three-day battle. There is much speculation as to the exact location of the battle – the late Padraig McCarthaigh was in no doubt—he placed it at Clashacrow. The Norman invasion also brought the Shortalls to Freshford where they built Castles at Ballylarkin, Kilrush, Kiloshulan, and Tubrid. The Purcells to Lismaine, Clone and Foulksrath, the Mountgarretts to Ballyragget, Ballyconra, Lodgepark and Balleen, and the Graces to Tullaroan. 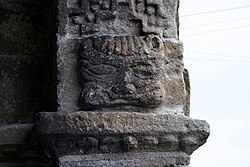 Detail from the portal of St Lachtain's

The Romanesque]] doorway of St Lachtain's Church of Ireland church in Freshford is one of only two such portal designs remaining in the country, the other being at Clonfert. The sandstone doorway is all that is left of the original church which was built in 1100, the present St Lachtain's having been built in 1731. It is located in the centre of the village on the R693 regional road.

The great house of Uppercourt Manor stands on the site of the bishop's palace built at Achadh Úr in 1225. In 1553 at the Reformation, a new, Protestant bishop, John Bale, was sent to live there. When five of his servants were murdered while saving the hay, the Bishop fled and never returned.

After him, the Shee family took over the manor and lived in Uppercourt for 100 years. In 1653 one of Cromwell's soldiers, Captain Sir George Askew, being owed £200, was given Uppercourt in settlement of the debt and the Shees were forced to leave.

The present house was built by Sir William Morris around 1790. The Eyre family came in 1879 and stayed till 1918 when the Maher brothers bought it. The Mill Hill Fathers bought it in 1932 and it became a secondary school. In 1989 it was sold and used for the storage and restoration of antique furniture. The manor now stands on a stud farm owned by Dr Paul O'Byrne who has restored the house in recent years. Among others, the stud is home of Kroongraaf, the top class KWPN approved sire.

On the village green stands the base of the Freshford Cross, made of soft sandstone now entirely worn away. When Lucas Shee of Uppercourt died in 1622, his wife, Ellen Butler, erected a cross in his memory at the back entrance to Uppercourt. The street to that entrance is still called Buncrusha or Bohercrussia Street, meaning Bun na Croise or Bothar na Croise in Irish, "Base of the Cross" or "Road of the Cross".

In 1790 Sir William Morris, who came to live in Uppercourt, had the cross removed and re-erected on the green. It bore the following inscription:

The noble Ellen Butler, wife of Lucas Shee Esq., got this monument made. Pray, traveller, that the souls of both may have eternal rest.

The Irish Conker Championships have been staged annually in Freshford since 1999.[2] Conkers are the fruits of the Horse Chestnut tree. The chestnuts for the competition are provided by 52 Horse Chestnut trees that surround the village green, which produce 30,000 conkers. Six hundreds competitors, including many from abroad, take part.