Foula (Old Norse: Fuglaey, meaning "bird island") is an island of Shetland. It is one of the United Kingdom's most remote permanently inhabited islands. The island has been owned since the opening of the 20th century by the Holbourn family.

On 8 September 1914, the RMS Oceanic, redesignated the HMS Oceanic for war service, was wrecked on the nearby Shaalds of Foula.

In 1937, the island was the filming location for the film The Edge of the World.

Foula is a bleak, yet spectacular island in the Atlantic Ocean, 20 miles west of Walls in Shetland. The island is about 2½ miles by 3½ miles, with a low-lying coastal strip along the east side. With an area of just under 5 square miles, it is the seventh largest and most westerly of the isles of Shetland. It rises from low broken cliffs in the east to precipitous cliffs on the west. The island has five peaks, rising to 1,371 feet at the Sneug and 1,220 feet at the Kame.[1] At the north end is Gaada Stack a natural arch. Foula lies on the same latitude as Saint Petersburg.

Foula has a population of 31 people, living in Hametown and Ham. Islanders previously made a living from fishing - first for white fish, then lobster.[2] Today, most islanders are crofters[3] with income from sheep farming and ornithological tourism.

A hidden reef, the 'Hoevdi Grund' or the Shaalds o' Foula, lies 2 miles east of Foula between the island and the Shetland mainland. Tides can reach 12 knots, the reef comes to within a few feet of the surface and thus poses a significant threat to shipping.[4] 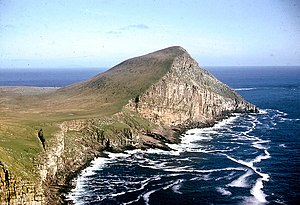 Ferries sail from Ham to Walls and Scalloway on Mainland, Shetland Mainland, and flights head from Foula's airstrip to Tingwall Airport.

There is little shelter for boats on the island. The only beach is at the head of Ham Voe on the east coast. Local boats, including the mail boat are hauled out of the water.

Foula was first inhabited as far back as 5,000 years ago.[5] Between 2006-2008, the Bath & Camerton Archeological Society took several trips to the Island of Foula to study prehistoric standing stones. A particular sub-circular stone circle of interest, was discovered in 2006 at "Da Heights" on the north of Foula. A further investigation launched in 2007 revealed that the sub-circular stone construction was man-made, elliptical in shape, with the axis pointing towards the mid-winter solstice, built before 1000 BC.[6]

In 1490, the Ciske family's estates were divided and Vaila and Foula became the property of Alv Knutsson. However, the Ciskes were Norwegian, and as Scotland had annexed Shetland a few decades before, there were confusing and conflicting claims of ownership.[7]

In 1720, a smallpox epidemic struck the 200 people living on Foula. Because the islanders were so isolated from the rest of the world, they had no immunity, unlike most Northern European peoples at that time. Ninety percent of the island's population died in the epidemic.[9]

The writer and journalist John Sands lived on Foula and Papa Stour for a while during the late 19th century. He fought hard against the prevailing truck system and created political cartoons lampooning its deficiencies. In one he drew Foula as a beautiful young woman being strangled by a boa-constrictor labelled 'landlordism' watched by other reptiles called 'missionary', 'laird' and 'truck'.[10]

The island was also one of the last places where the Norn language was used as a first language (although it is claimed that Walter Sutherland of Skaw on Unst was the last speaker), and the local dialect is strongly influenced by Norse.

Professor Ian S Holbourn, the last Laird of Foula, describes the disaster of 8 September 1914, when the White Star Line RMS Oceanic hit the Shaalds o' Foula, becoming a wreck within two weeks. Holbourn's remarkable luck with steamship travel held through the following May, when he embarked upon the RMS Lusitania, sunk by a German torpedo.

The professor's grandson, Robert Holbourn, a Naval architect, acted as the island's "Peet Marshal" for many years. Peat is valuable and scarce resource for heat and fuel in Shetland. Its cutting requires skill, taking several years to master. The most able islanders become known as the 'Cutters' and, in the spirit of a long standing Foula tradition, all able-bodied men are now and then 'bid to the banks' of women who 'didn't have a cutter in the house.'

Simon Martin, who stayed on the Isle of Foula for five years during his prolonged claim upon the wrecked Oceanic, describes the island as follows:

"Foula, or Ultima Thule, as it was known as far back as the Roman times, rises impurely out of the water, and from the Shetland Isles mainland its five peaks, the Noup, Hamnafield, the Sneug, Kame and Soberlie stand out starkly and characteristically. The cliffs on the west side vie with those of St Kilda as the highest sheer cliffs in Britain, 1,200 feet of solid rock towering from the sea.

"Foula, or Fughley as it was once also known, means literally 'Bird Island', with an estimated half million birds of various breeds sharing the rock with the inhabitants. The island’s surface largely consisting of a peat bog on rock."

The Holbourns of Foula are descended from John of Westby (Westbie), Lincolnshire, who was the father of John of Westby, churchwarden of that village.

A lighthouse at the southern tip of the island was built in 1986. Originally powered by acetylene gas, it has been converted to solar and wind power.[11]

Culture and the arts 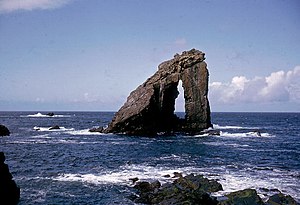 Vagaland's poem Da Sang o da Papa men[12] about the fishermen of Papa Stour includes an insistent chorus chant, "Rowin Foula Doon".[13] This refers to the fishermen's practice of rowing their open fishing boat out to sea until the high cliffs of Foula were no longer visible. This entailed the boat being some 60 miles west of Papa Stour.[14][15]

The Edge of the World

Michael Powell made The Edge of the World in 1937. This film is a dramatisation based on the true story of the evacuation of the last thirty-six inhabitants of the remote island of St Kilda on 29 August 1930. St Kilda lies in the Atlantic Ocean, far to the west of North Uist in the Outer Hebrides; the inhabitants spoke Gaelic. Powell was unable to get permission to film on St Kilda. Undaunted, he made the film over four months during the summer of 1936 on the island of Foula, in the Shetland Isles.