Difference between revisions of "Flag of Anglesey" 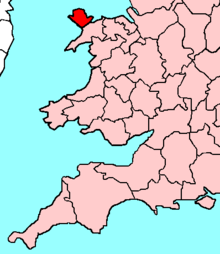 The Anglesey flag is the flag of the County of Anglesey (Welsh: Môn) It was registered by the Flag Institute in March 2014. 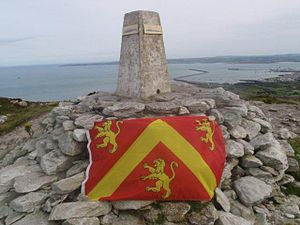 The Anglesey flag displayed on the summit of Anglesey, Holyhead Mountain

The design is a banner of the arms ascribed by later mediaeval heralds, to the earlier, locally celebrated ruler, Hwfa ap Cynddelw. The earliest reference to the arms seems to be in the work of the bard Lewis Glyn Cothi from the period of 1447 to 1486 although there is no evident explanation for the choice of colours or charges used. A late C15th century stained glass window with the arms refering to Hwfa are apparently depicted in the east window of Llangadwaladr church on the island. According to the heraldic historian Wilfrid Scott-Giles, Anglesey County Council used the Hwfa arms informally before they were incorporated into the design granted to them officially. Between 1857 and 1950 the arms were used by Anglesey Constabulary. An association between the Hwfa arms and the island county of Anglesey is thus long established.