Falkland Palace is a palace in the town of Falkland in Fife. Once the country residence of the Kings of Scots, it is now in partial ruin, although the half that survives is in good condition.

The palace and its grounds are owned by the Keeper of Falkland Palace, a hereditary position currently held by Mr. Ninian Crichton-Stuart, although all practical responsibilities are delegated to the National Trust for Scotland.

The Scottish Crown acquired Falkland Castle from MacDuff of Fife in the 14th century. In 1402 Robert Stewart, 1st Duke of Albany imprisoned his nephew David Stewart, Duke of Rothesay, the eldest son of King Robert III, at Falkland. The incarcerated Duke eventually died there from neglect and starvation.

Albany was exonerated from blame by Parliament, but suspicions of foul play persisted, suspicions which never left Rothesay's younger brother the future James I of Scotland, and which would eventually lead to the downfall of the Albany Stewarts. John Debrett, writing in 1805, was in no doubt of Duke Robert's motives and guilt:

This Robert, Duke of Albany, having obtained the entire government from his brother, King Robert, he caused the Duke of Rothesay to be murdered, thinking to bring the Crown into his own family; but to avoid the like fate, King Robert resolved to send his younger son James, to France, then about nine years old, who being sea-sick, and forced to land on the English coast...was detained a captive in England eighteen years. At these misfortunes King Robert died of grief in 1406.[1]

Between 1501 and 1541 Kings James IV and James V of Scotland transformed the old castle into a beautiful royal palace: with Stirling Castle it was one of only two Renaissance palaces in Scotland. To address the poor state of the garden and park, James V appointed a new Captain and Keeper, William Barclay, Master of Rhynd, in March 1527.[2] Ten years later, James V extended his father's buildings in French renaissance style. He died at Falkland in December 1542 soon after hearing that his wife had given birth to a daughter – who became Mary Queen of Scots.[3]

Falkland became a popular retreat with all the Stewart monarchs. They practised falconry there and used the vast surrounding forests for hawking and for hunting deer. Wild boar, imported from France, were kept in the Park, within a fence made by the Laird of Fernie.[4]

Nearby Myres Castle is the hereditary home of the Royal Macers and Sergeants at Arms who served Falkland Castle since at least the sixteenth century. John Scrimgeour of Myres supervised building at the Palace from 1532 - 1563.[5] 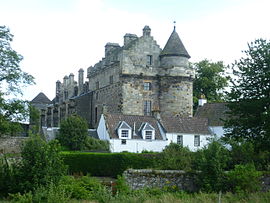 Falkland Palace, from the Maspie Burn 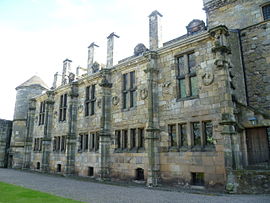 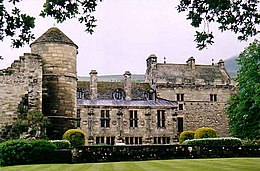 Falkland Palace from the gardens 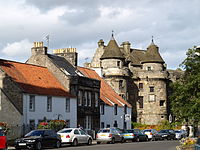 The Palace in the town

After the Union of the Crowns, James VI and I, Charles I, and Charles II all visited Falkland. During its occupation by Oliver Cromwell's men the huge forest that surrounded the palace was chopped down and the building's East Range was burnt, leaving it in its current ruinous state.

The Palace suffered many years of neglect until 1887 when John Crichton-Stuart, 3rd Marquess of Bute acquired the building and began an extensive restoration programme. Had he not died suddenly in 1900, he would probably have gone on to rebuild the ruined portions of the Palace.

Falkland Palace has been in the keepership of the Crichton-Stuart family since its acquisition by the 3rd Marquess of Bute in 1887. The current Keeper is the Marquess' great-great-grandson. In 1952 the National Trust for Scotland (NTS) was appointed Deputy Keeper of the Palace, and they now care for and maintain the Palace and its extensive gardens. A NTS virtual tour of the palace is available.

The palace has two wings arranged in an 'L' shape, now called the South and East Quarters or Ranges. The palace courtyard is entered through the gatehouse tower at the west end of the South Quarter. The external ashlar façade of the South Quarter has gunloops at basement level. Above these are the small windows of the private lodgings, and on the second level the large paired windows of the Chapel Royal. Between these windows are weathered niches and statues. The corbels show the instruments of the passion; the chapel at Falkland was dedicated to St Thomas and is used as the Roman Catholic parish church for Falkland.[6]

The wallhead is finished with a decorated cornice and battlement which continues around the west side of the gate tower. To the east of the chapel there is small rectangular sectioned tower which once housed a circular staircase, and beyond is the partly reconstructed gable of the East Quarter. Although some writers have attributed part of the South Quarter to the time of James IV, the form of the gunloops, the continuous parapet, and the documented payments to Peter the Fleming for the 5 statues in 1539 adequately demonstrate that the present appearance dates from the works of James V.[7] Within, visitors can view the Keeper's Apartments in the Gatehouse tower, the Chapel Royal and gallery.

The East Quarter, apart from its courtyard façade is ruined. The centrally placed access tower, the Crosshouse, was reconstructed by the Marquess of Bute. The National Trust's architect, Schomberg Scott recreated the King and Queen's bedchambers within. The northern section of the East quarter was originally a lodging built by James IV. The master of works, James Murray of Kilbaberton was ordered to repair the flat roof of the King and Queen's galleries and the roof of the lodging of the East Quarter in 1616 in anticipation of the visit of James VI.[8]

The South and East courtyard façades were decorated and unified with pilasters in a French renaissance style between 1537 and 1542. Their appearance is comparable to the French Chateau of Villers-Cotterêts. The buttresses on the East are dated 1537, and on the South, where the masonry is more sophisticated, 1539. The later work may be connected with Nicolas Roy, a French mason sent to Scotland in March 1539 by Antoinette of Bourbon, the mother of Mary of Guise.[9] The chapel ceiling dates from the time of James V and was re-decorated for the visit of Charles I in 1633. James Murray, master of works, was ordered to repair the roof of the South Quarter in 1625, with instructions to "have a special care and regard" that the great ceiling of the Chapel be "preserved and kept as far as possibly may be."[10]

The courtyard was originally finished with a great hall to the north. The footprint of the building was established by excavation and laid out with paving slabs by the 3rd Marquess of Bute. On lower ground in the gardens, beyond slight remains of the mediæval castle uncovered c. 1900, lies the original real tennis court. Built in 1539, it is the world's oldest tennis court still in use, .[11] The roofed spectator area is home to a number of swallows, who swoop in and out, through the door left open for them, during spring and summer. The court is home to the Falkland Palace Royal Tennis Club.