Falkirk is a town Stirlingshire, which lies within in the Forth Valley, almost midway between the two most populous cities of Scotland; 23 miles north-west of Edinburgh and 20½ miles north-east of Glasgow.

The town lies at the junction of the Forth and Clyde Canal and the Union Canal, a location which proved pivotal to the growth of Falkirk as a centre of heavy industry during the Industrial Revolution. In the 18th and 19th centuries Falkirk was at the centre of the iron and steel industry, underpinned by the Carron Company situated in the nearby village of Carron. The company was responsible for the manufacturing of carronades for the Royal Navy and also later many British pillar boxes.

In the last 50 years heavy industry has declined, and the economy of the town relies increasingly on retail and tourism. Despite this Falkirk remains the home of many international companies like Alexander Dennis, the largest bus builder in the United Kingdom.

The town hosts the Falkirk Farmers' Market on the first Friday of every month[1] which brings a boost to Falkirk's retail sector.

Attractions in and around Falkirk include the Falkirk Wheel, Callendar House and Park and remnants of the Antonine Wall.

Falkirk lies in an area of undulating topography between the Slamannan Plateau and the upper reaches of the Firth of Forth. The area to the north of Falkirk is part of the floodplain of the River Carron. Two tributaries of the River Carron - the East Burn and the West Burn flow through the town and form part of its natural drainage system.[2] Falkirk sits at between 164 and 410 feet above sea level.[3]

The underlying geology of the town of Falkirk is characterised by glacial deposits. Elevations above 300 feet are covered by a mixture of glacial till and boulder clay with low-lying areas covered by sandy soils and loams.[3] As Falkirk is not far from the coast, post-glacial features akin to raised beaches are particularly predominant to the north of the town centre, and this gives rise to differing elevations within the town.[3]

Unsorted glacial till gives rise to such features of glacial deposition as eskers, and drumlins which are predominant over much of the area. Such elements provide natural transportation routes and it is this complex underlying geology that the town is built upon.[3]

The town's fortunes have depended on its position in the Forth valley, in the midst of the pinch between the coasts where roads may be driven through and in latter days the canals and railways.

The Antonine Wall, which stretches across the Central Lowlands from the Clyde to the Forth, passed through the town and remnants of it can be seen at Callendar Park.

Similar to Hadrian's Wall but built of turf rather than stone so less of it has survived, it marked the northern frontier of the Roman Empire between the Firth of Forth and Firth of Clyde during the 140s AD.[4] Much of the best evidence of Roman occupation in Caledonia has been found in Falkirk, including a large hoard of Roman coins and a cloth of tartan, thought to be the oldest sample of tartan ever recorded.[5]

Falkirk Old Parish Church stands on the site of the mediæval church, which may have been founded as early as the 7th century.[6]

In the 18th century the area served as the cradle of Scotland's Industrial Revolution, becoming the earliest major centre of the iron-casting industry. James Watt cast some of the beams for his early steam engine designs at the Carron Iron Works in 1765. To this day, cast-iron cooking pots manufactured at the works are known in South Africa and Zimbabwe as "falkirks".

The area was at the forefront of canal construction when the Forth and Clyde Canal opened in 1790.[7] The Union Canal (1822) provided a link to Edinburgh and early railway development followed in the 1830s and 1840s.[8] The canals brought economic wealth to Falkirk helped with the town's growth. Through time, trunk roads and motorways followed the same canal corridors through the Falkirk area, linking the town with the rest of Scotland. Many companies set up work in Falkirk due to its expansion. A large brickworks was set up at this time, owned by the Howie family. During the 19th century, Falkirk became the first town in Great Britain to have a fully automated system of street lighting, designed and implemented by a local firm, Thomas Laurie & Co Ltd.[9]

Falkirk claims the reputed record of having the shortest street in Britain, Tolbooth Street, to the north of the Falkirk Steeple.[10]

The town has two mottos: "Touch ane, touch a" (Touch One, Touch All) and "Better meddle wi the deil than the bairns o Fawkirk" (Better meddle with the devil than with the children of Falkirk). 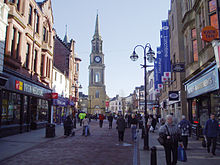 Today, the economy of Falkirk is focused on Retail and Services, in contrast to the heavy industries and manufacturing sectors which contributed to the growth of the town over the last 300 years. Falkirk is a large retail centre catering to the town itself and a wide surrounding area, stretching from Cumbernauld in the west to Bo'ness in the east.[11]

The High Street was pedestrianised in the late 1980s and the Howgate Shopping Centre opened in [11] 1989. A number of supermarkets have developed on peripheral sites surrounding the town centre in recent years.[12]

The public sector and public services also have a foothold in the Falkirk area; the local council is one of the largest employers in this sphere, with a workforce of over 7,000. One of the principal offices of the Child Support Agency, covering Scotland and the north east of England, is located in the Callendar Business Park on the outskirts of Falkirk.

Many Falkirk residents are also employed within the petrochemicals sector based in the neighbouring town of Grangemouth where there is an agglomeration of such industries underpinned by the Ineos (formerly BP) oil refinery located there. Alexander Dennis, one of the world's largest bus manufacturers, is headquartered in Falkirk with the operations plant located nearby.[13]

The area has an equally high reputation for its new residential, retail, heritage and leisure developments and it has gained much popularity as a place to live and a place to visit.

The Park Gallery, also in Callendar Park, is a contemporary art gallery in the former Stable Block of the park.[14]

The Falkirk Wheel is the only rotary canal connector in the world. The Wheel was completed in 2002, built to commemorate the new Millennium.[15] It has become, as was intended, a most popular attraction in Falkirk.

The Falkirk Wheel connects the Forth and Clyde Canal to the Union Canal. The joining of the canals was a Millennium project to retire navigability across the Central Lowlands.[16] The two canals though are separated vertically by 115 feet, far beyond the capability of a single lock, and though the two were once connected by a flight of 11 locks stretched over more than a mile of canal, this link was dismantled in 1933. The solution then was a unique rotary boat lift between a basin off the Forth and Clyde at the bottom and a spur of the Union on an aqueduct high above. Opposite each other on the vast steel wheel are two "gondolas", one on the level of each canal. A canal boat on one canal enters the gondola, which is then closed, and the great wheel turns, moving the gondolas up and down each to the other canal. Riding the wheel is a popular day out.

Each gondola is attached to a cog 26 feet in diameter, meshed to a central 26-foot cogwheel by smaller cogs. Notwithstanding the size of the structure, the precise balancing of the gondolas and cogs allows the Wheel to turn with ten hydraulic motors in the central spine running on just 1.5 kW of electricity.[17]

The Wheel was built in Derbyshire and reassembled in Falkirk in 2002.

In Falkirk High Street lies the Falkirk Steeple, the current building was built in 1814 and is protected as a category A listed building. A stylised image of the steeple appears on the crest of Falkirk Football Club. It is widely regarded as the centre point of the town.