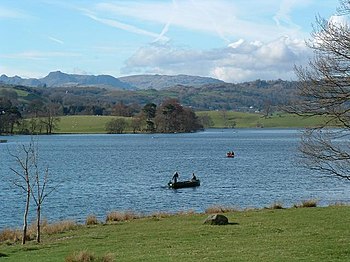 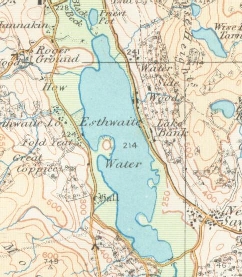 Esthwaite Water is one of the smaller and lesser known waters of the Lake District. It is in Lancashire North of the Sands, amongst the Furness Fells between the much larger lakes of Windermere and Coniston Water. To the north is the village of Hawkshead and to the west is Grizedale Forest.

The lake covers around 280 acres and is known for its excellent fishing, particularly trout and pike. It has been designated as a Site of Special Scientific Interest.

Wordsworth also mentions the lake in his Prelude: "Make green peninsulas on Esthwaite's Lake", and "From Esthwaite's neighbouring lake the splitting ice".

"Esthwaite" is may be either "the eastern clearing", with Middle English est ("east") possibly replacing an Old Norse aust(r) or "the ash tree clearing", from Old Norse eski ("ash trees" or "ash copse").

Whaley also mentions an outside possibility that the Cunsey Beck, which flows out of Esthwaite Water may previously have been called 'Ystwyth' 'agile one', a Brittonic word.