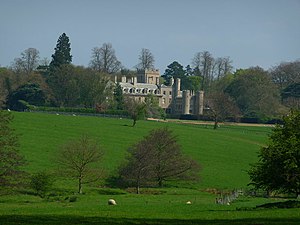 Elton Hall is a baronial hall in Elton, in the very north-west of Huntingdonshire, on the border with Northamptonshire. It has been the ancestral home of the Proby family since 1660.

The hall stands in an 3,800-acre estate through which runs the River Nene. The building incorporates 15th, 17th, 18th and 19th century parts and is a Grade-I listed building.

The Victorian gardens have been skilfully restored in recent years and contain a knot garden, a new rose and herbaceous garden, fine hedges and a Gothic orangery built to celebrate the turn of the 21st century. The gardens are promoted by the Campaign to Protect Rural England.[1]

The county border runs along the south-facing wall of the hall, leaving the hall itself in Huntingdonshire, whilst the formal gardens and orangery lie in Northamptonshire.

Elton Hall is two miles from the site of the demolished Fotheringhay Castle in Northamptonshire, where Mary, Queen of Scots was executed in 1587.

The south front (garden) incorporates the 15th-century tower and chapel which were built at the time of Henry VII. In the 17th century a new wing was added to the west.

The Marble Hall and main staircase were designed by Henry Ashton and are remarkable examples of a mid-Victorian revival of mid-18th century style. The Drawing Room, the largest room in the house, was formed from the medieval chapel around 1740. The 18th-century ceiling with its enriched cornice and frieze remains, but the present decoration dates from 1860. The Dining Room was built in 1860 and was also designed by Ashton. The three large Gothic windows are exact copies of the windows that were in the north wall of the mediæval chapel.

The Library contains a large collection of books representing a continuous interest from the time of Sir Thomas Proby. From the Main Library a short passage leads to the Inner Library situated in the mediæval Sapcote Tower. Other rooms of special interest are the Lower and Upper Octagon rooms, the Yellow Drawing Room and the Ante Dining room. The current chapel was formed from part of the undercroft of the Sapcotes' chapel and has 15th-century vaulting.[2]