Elton is a small village in Huntingdonshire and one of the county's most northerly villages. It stands on the B671 road.

Elton is one of the most northerly villages in the District. It is an ancient place with 17th Century houses on its village street, an early Danish cross in its churchyard and the church itself of the 14th Century.

Elton is two miles from Fotheringhay, where Mary, Queen of Scots was executed in 1587, five miles from Oundle, and eight miles from Peterborough, all in Northamptonshire. Elton was once connected to these places by Elton railway station which closed in 1953, but the route is now a popular walk.

Elton has a villag primary school, a restaurant and a garden centre. 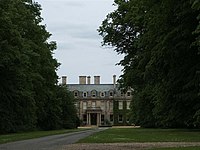 On the southern side of the village are the extensive grounds of Elton Hall, a house mostly of the last two centuries although the gatehouse and undercroft survive from the original mansion erected for Sir Richard Sapcote in the 15th Century.

The Hall is privately owned by Sir William Proby, whose family owns much of the village of Elton, but it is thrown open to public visits at some times in the year. The grounds of Elton Hall have are many fields and paths with livestock.

The hamlet of Over End lies a mile south of the village close by the Hall.