Difference between revisions of "Elsfield"

Elsfield is a village in Oxfordshire about three miles north-east of the centre of Oxford. The village stands on the western brow of a hill with relatively steep sides above the River Cherwell.

The parish church is St Thomas of Canterbury. Its chancel arch dates from at least the latter part of the 12th century. The church formerly had a north aisle that may also have dated from this period. There is a canonical sundial on the south wall. In about 1273 the church was remodelled and rededicated to Thomas Becket ('St Thomas of Canterbury').

In 1849 the church was heavily restored in an Early English Gothic style. Until then, the blocked arcade of the north aisle was visible in the north wall of the nave. During the restoration the arcade seems to have been removed; there are 12th century capitals in the Vicarage garden that may have come from it. The floor and seating were renewed in 1859 under the direction of the Gothic Revival architect George Edmund Street. In about 1860 a mosaic reredos by Salviati was added in the chancel.[2]

The novelist John Buchan (Governor General of Canada, 1935-1940 and author of The Thirty-Nine Steps) lived at Elsfield Manor from 1919 until 1935. His ashes are buried in St Thomas's churchyard. 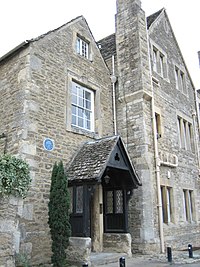 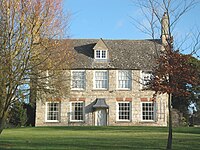