Edgeworthstown or Mostrim is a town in County Longford. It lies is in the east of the county, near the border with Westmeath. Nearby towns are Longford 7½ miles to the west, Mullingar 16 miles to the east, Athlone 25 miles to the south and Cavan 26 miles to the north. 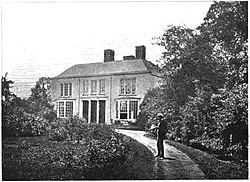 Edgeworthstown House, from The Life and Letters of Maria Edgeworth, 1894

The area was named Edgeworthstown in the 19th century after the Anglo-Irish Edgeworth family. An estate was built there by Richard Lovell Edgeworth. His family—which includes Honora Sneyd (his second wife), novelist Maria Edgeworth (his daughter), botanist Michael Pakenham Edgeworth, economist Francis Ysidro Edgeworth, and priest Henry Essex Edgeworth—lived at the estate.

The area's original name was the Irish Meathas Troim or Meathas Truim. This was anglicized as Mastrim, Mostrim, and so forth. These names continued to be used by the locals. In 1935, at the behest of the local Town Tenants' Association, Longford County Council officially changed the town's name to Mostrim.[1] However, in 1974, a local government order reverted the name to Edgeworthstown.[2] Today, both names are in use.

The town is built where the N4 Dublin-Sligo/ N5 Dublin-Castlebar road crosses the N55 Cavan-Athlone road. The town also has a railway station on the Dublin–Sligo railway line. Edgeworthstown railway station opened on 8 November 1855.[3] Edgeworthstown expanded significantly during the first decade of the 21st century with many new housing developments and updated transport infrastructure including a bypass. The N4 National primary route formerly ran along the Main Street until the town centre was by-passed in July 2006. The N55 route from Athlone to Cavan still passes through the town centre.