Edgbaston is a town within the city of Birmingham, and within Warwickshire.

Edgbaston has a well earned reputation as the most upmarket and affluent part of Birmingham or "where the trees begin". In the 19th century, the area was under the control of the Gough-Calthorpe family who refused to allow factories or warehouses to be built in Edgbaston, thus making it attractive for the middle class.

The University of Birmingham is in Edgbaston, established here as the Birmingham Medical School in 1825.

Edgbaston means "Ecgbald's estate", from an otherwise unknown founder or landowner. The name was recorded as Celboldistane in 1139, suggesting that it may instead be from the Old English stan ("stone"). 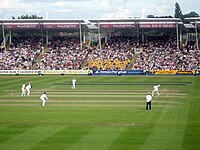 Warwickshire County Cricket Club is based at the Edgbaston Cricket Ground. As well as hosting regular county matches, the ground plays host to the England cricket team during one day internationals and test matches.

The area also has a world class tennis venue; The Edgbaston Priory Club. The DFS Classic for female players has been held there every year since 1982 and some of the world's top players participate. The tournament is part of the WTA Tour and wins count towards world rankings. The oldest lawn tennis club in the world, the Edgbaston Archery and Lawn Tennis Society, founded in 1860 is nearby.[1]

There is also a members-only golf course which offers views over the southern part of the suburb. Edgbaston Croquet Club has been located in the area since 1915.[2] 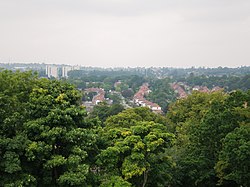 J R R Tolkien lived in Edgbaston during his teenage years, and the two towers of Edgbaston, Perrott's Folly and the Waterworks Tower are said by some to have provided inspiration for part of his The Lord of the Rings novel.

Edgbaston contains the only Grade I listed domestic building in Birmingham, notably one of the Arts & Crafts houses number 21 Yateley Road, designed by Herbert Tudor Buckland, and built for his own use.

Pebble Mil Studios, the BBC studios for Birmingham and the Midlands until 2004, were in Edgbaston. They opened at Pebble Mill in 1971 and were in use for 33 years, closing in October 2004 and demolished the following year. The site remains vacant.