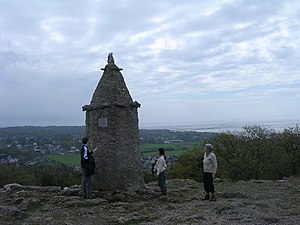 The Pepperpot above Eaves Wood

Eaves Wood is a delightful fellside woodland within the National Trust's estates known collectively as 'Arnside and Silverdale'. It spreads over the slopes of a low hill known as Castlebarrow Hill from the northern edge of Silverdale in Lancashire up to the crest of the hill which marks the northern border of the county, over which is Middlebarrow Wood, in Westmorland.

The Trust maintains a network of paths through the wood for visitors.

This is not technically an ancient woodland but one well set in and of natural variety, of mixed trees, oak, ash and lime and others: the lime trees surrounded by undergrowth deep in ferns and lily-of-the-valley, and open, leaf-strewn forest floor under the great beeches, the result of a plantation. In places are grassy glades and limestone pavement.

At the top of the hill, a top known as King William's Hill, stands a monument built to celebrate Queen Victoria’s Diamond Jubilee, known as The Pepperpot. [1] Friom here there are gorgeous views to the Yorkshire Dales and the Bowland Fells, and over Morecambe Bay to Lancashire North of the Sands, and the fells of Westmorland.

There are areas of exposed limestone pavement in the wood, which provide a habitat for rare plants and wildlife; junipers grow in cracks in the rock.

Eaves Wood has been designated a 'site of special scientific interest'.[2] The designation notes that it is situated on a carboniferous limestone hill, where the limestone reaches a height of 276 feet above sea level and has outcrops at many places in the wood. Most of the areas of limestone pavement have been damaged. The shallow soils consist of rankers, rendzinas and calcareous brown earths and support a lime-loving vegetation. 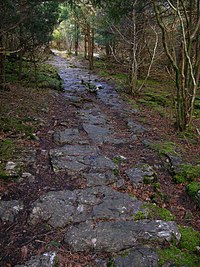 The wood consists mainly of northern calcareous hazel-ash woodland with smaller areas of upland sessile oak woodland and sessile oak-ash-lime woodland ('Jubilee Wood'). A wide variety of shrubs and woody species are present, including the wild service tree (Sorbus torminalis) and the very rare whitebeam (Sorbus lancastriensis). The woodland is dominated by ash and oak with hazel and yew. Beech, larch and pine have been extensively planted and become naturalised.

Jubilee Wood is dominated by small leaved lime with oak, ash and patches of wych elm. Natural England conclude that the presence of so much small leaved lime suggests that this is the oldest part of the wood which has probably never been completely cleared.[2]

Particularly noted is the richness and diversity of the herbs with an outstanding assemblage of rare and uncommon plants, amongst them mountain melick, yellow star of Bethlehem, yellow bird’s-nest, dark red helleborine, stinking helleborine, fingered sedge and abundant lily-of-the-valley occur together with the more typical flora characteristic of limestone woodland. Small glades and clearings provide a habitat for spring cinquefoil.

Over 250 fungi have been recorded too, and a variety of animal life including the wood ant, the bug Issus muscaeformis in its second British site (the other being the Gait Barrows Nature Reserve) and the brown snail Zenobiella subrufescens which is quite widely distributed in western Britain but it usually associated with primary woodland. Red squirrels are resident in the woods too.[2]