Easington is a town in County Durham, in the east of the county, close to the North Sea coast. It comprises the ancient village, now known as Easington Village, and the ex-mining town of Easington Colliery, which runs out almost to the sea cliffs. The two have separate civil parishes. Easington is at the junction of the A182 leading north-west to Hetton-le-Hole, Seaham Harbour and Houghton-le-Spring, and the A19, which heads north to Sunderland, and south to Middlesbrough in Yorkshire.

As a former coal mining town, Easington is now an unemployment blackspot after the mine closed in 1993.

Easington is the only place on earth with dolomitic limestone cliffs on the coastline.

Easington Colliery began when the pit was sunk in 1899, near the coast. Thousands of workers came to the area from all parts of Britain and with the new community came new shops, pubs, clubs, and many rows of terraced "colliery houses" for the mine workers and their families. The town's infant and junior schools were built in 1911.

On 7 May 1993, the mine was closed, with the loss of 1,400 jobs, causing a decline in the local economy. The pit shaft headgear was demolished the following year.

The school buildings are adjacent to Seaside Line but lie derelict. A development company bought the buildings in 2003 and applied for planning permission to build 39 residential units, but a public inquiry resulted in a ruling that protected the buildings from demolition.

The former Easington District Council had an office building here, which had been the department's home for over eighty years. It was demolished in April 2013. Although the building is gone; the fixtures and fittings, including oak desks, from the council chamber have been placed in storage at Beamish museum. 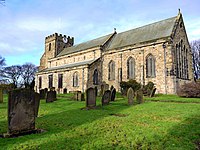 The Parish Church is St Mary The Virgin. St Mary's is mostly 12th–13th century, and contains a notable amount of seventeenth-century woodwork.[1] The church contains architectural fragments dating from Anglo-Saxon times, possibly as early as the 8th century.

From 1256 until 1832 the Rector of Easington was also Archdeacon of Durham. 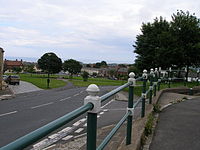 There is evidence of Easington's having been an important site before the Norman conquest, including the architectural fragments from as early as the 8th century found within the fabric of St Mary's Church.

One of the most prominent events in the long history of the village was the hanging of two men on the village green for involvement in the plot to replace Queen Elizabeth I with Mary, Queen of Scots.

The sinking of Easington Colliery began on 11 April 1899. The ward lies just north of Peterlee and the settlement grew up around the colliery. Development west along the B1283 road has resulted in a continuous settlement with Easington Village. However, the two places have retained their distinctive characters and continue to reflect different trends.

Although sinking the shafts for the colliery had started in 1899, the first coals were not drawn until 1910 due to passing through water bearing strata. Two main pits were sunk: the North Shaft (downcast) and the South Shaft (upcast). Both of these reached down to the Hutton seam at 1,430 feet and 1,500 feet respectively.[2] The seams worked were Five Quarter, Seven Quarter, Main Coal, Low Main and the Hutton at the bottom.[3] Underground the colliery was split into a number of distinct areas or districts. The village is built over the seams, and to safeguard it from subsidence there is a reserved area under it.

Significantly one district extends for four miles out under the North Sea. Ventilation was therefore not simple; enough air was needed to ventilate the extremities of the eastern workings, whilst that for the closer faces did not need such a powerful supply. Too much air in the closer workings would starve the distant ones. Supplementary fans and traps needed to be employed.[4] Neglect in this regard may have been a contributory factor in the catastrophic mine explosion in 1951.

Easington Colliery was the last pit to close on the Durham Coalfield in 1993, with the loss of 1,400 jobs.

On 29 May 1951, a pocket of firedamp exploded in the West or "Duckbill" district of the mines (named after the duckbill excavators used in the district), which lies to the northwest of the shafts and to the north of the village. The explosions and the resulting mine collapses killed 83 men, including 2 rescue workers.

At the time, the Duckbill district was being developed and it appears that the mine managers overlooked the changes to the ventilation which would be required, which was admitted by the Assistant Agent (Mr H E Morgan) in cross examination.[5]

The coal cutter used in the mine consisted of a rotating part with a number of teeth or picks. Sparking from the cutters in the Duckbill district had been observed, an effect usually caused by a blunting of the blades, but as nothing had followed from the sparking it was ignored.[6]

On 29 May, the cutter hit a patch of pyrites and generated sparks, which ignited a pocket of firedamp which had been leaking from the void above. The resulting explosion travelled down the south headings to the west roads. Such an explosion in a confined space causes a blast of air which can stir up any dust lying around,and here indeed coal dust was raised, causing a coal dust explosion, which now travelled along the west roads, down the straight north headings and into the main coal where is reached as far as the training area.[7] Two falls occurred; one in the main coal shortly before the drifts leading to the straight north roads, the other in the duckbill district shortly before the 3rd south heading.

The explosion by ill-luck occurred during a shift change, when both the nighttime stone-shift and the small hours fore-shift were underground at the faces.[2] 38 men from the stone-shift and 43 from the fore-shift were killed, all but one instantly. The man who survived died of his injuries just a few hours later. As a result of the total loss of life in the vicinity there were no eye-witness accounts of the explosion or its immediate aftermath.[8]

Frank Leadbitter, woring outside the affected area, led men through the dust cloud to attempt a rescue, while the colliery manager was telephoned to arrange evacuation. The air was foul with afterdamp, which overwhelmed and killed a further two men bringing the total to 83.

Since 2000 the village and colliery have seen an influx of travellers with horses and traps using the roads as they demonstrate their horsemanship and harness driving skills. Many of the locals in the colliery now keep horses, even though they are not Romany or Gypsies, and can be seen (especially at weekends) trotting around the village. The church of St Mary the Virgin overlooking the green in May 2013 held a funeral with a horse from Essex brought up to pull the cart carrying the coffin.

The town is home to one of the few remaining 13th century domestic buildings in the country, Seaton Holme. Once an open hall mediæval home, it became an archdeacon's residence and was a children's home for a time before falling into disrepair. In 1992 it was finally restored to a semblance of its former stature.[9]

Easington has been depleted of local banks and building societies due to the closure of the mine in 1993. It is officially recognised as being the most economically deprived town in the United Kingdom and has the largest percentage of long term illness and unemployment.

Easington Colliery Band was founded in 1913. Players with band experience were encouraged by the management to come from the West of Durham to work at the colliery and play in the band. The band was supported financially and run by the joint board of unions, until the start of World War II. The band played for community activities, such as dances, concerts, and competitions. For the duration of the war the Easington Colliery Youth Band became the National Fire Service Band, which was eventually 'demobbed' in 1945 to become the Easington Public Band.

The town is known as the setting of the folktale, "The Legend of the Easington hare".[10]

The film Billy Elliot, set in the fictional County Durham town of 'Everington', was mainly shot in Easington, though the filmmakers had to go a long way north to Ellington to find the only working mine in the region. The subsequent stage musical version specifically identifies Easington as its location.