Earlsfield is a town in Surrey a little south of Wandsworth and entirely contiguous with its neighbours in the metropolitan conurbation.

Earlsfield is a typical metropolitan suburb and consists mostly of Victorian terraced houses. It is served by Earlsfield station, one stop north of Wimbledon on the line to Waterloo Station. The River Wandle flows by Earlsfield, creating a modest green corridor.

There is not a considerable history to the area as it developed around a mainline railway station that was built at the end in April 1884 in the place of a large Victorian residence called Earlsfield. When the site was sold by the Davis family to the London and South Western Railway one of the conditions of sale was that the station would be named after their house. Thus the name of that house provided the name of the station, and thence to the suburb.[1]

The area was once a working class suburb of Wandsworth and as such much of the property is medium-sized terraced housing, though several new developments have been or are being developed, notably the Olympian Homes development between the station and library. The area now houses young families attracted by the affordability of the area in comparison to its north, west and eastern neighbours Clapham, Wandsworth, Battersea and Putney contributing to the wider area's nickname of Nappy Valley.[2]

Earlsfield Library has on display a range of historic photographs of the area.

The River Wandle flows roughly parallel to Garratt Lane through the area, and has been the subject of a major, council funded clean-up operation, though it has been subjected to several pollution incidents in the past few years.[3] There is some light industry located between the high street and the river. 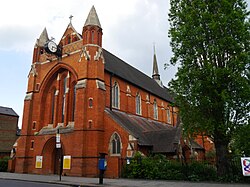 Garratt Lane is home to cross-cultural theatre company Tara Arts and its venue Tara Theatre. Opened in 2007, the space plays host to local and national companies as well as staging its own productions.

Several businesses are based in Smiths Yard off Summerley Street, just behind Barclays Bank.

There are two churches in the centre - Earlsfield Baptist church on Magdalen Road and St Andrew's (Church of England) on the corner of Garratt Lane and Waynflete Street, with St Gregory's (Catholic) and St John the Divine (CoE) further down Garratt Lane towards Wandsworth. 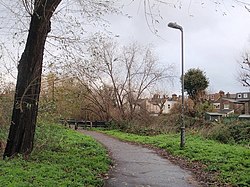 The Wandle Trail at Earlsfield