Dyrham is a village in Gloucestershire, found of the A46 trunk road about 6½ miles north of Bath and a little south of the M4 motorway. The Cotswold Way long-distance footpath runs through the village.

Dyrham is believed to have been the site of the important Battle of Deorham fought in AD 577 between the West Saxons under Ceawlin and Cuthwine, and the Britons of the West Country. The outcome of the battle was a decisive victory for the West Saxons, allowing them to colonise three important cities; Gloucester, Cirencester and Bath. It is said to be the battle which at last brought the Saxons to the Severn and cut Cornwall off from Wales. Hisotrians place the battle at the hill fort on Hinton Hill just north of the village.

The Domesday Book of 1086 records the tenant-in-chief of Dyrham as William FitzWido who held seven hides in Dyrham, formerly the land of Aluric. The manor passed to the Norman magnate Wynebald de Ballon, and then through the Newmarch family to the Russell family, notably being held by John Russell (died c.1224) and William Russell (1257–1311). 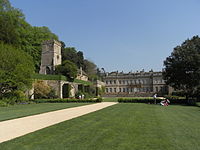 The parish church of Dyrham, St Mary's, has for many centuries stood next to the manor house, which today is the grand mansion, Dyrham Park. Dyrham Park house dates from the reign of William and Mary, and is thought to incorporate some of the structure of the ancient home of the Russells. In this church can be seen the funerary brass of Sir Maurice Russell (d.1416)

By the 15th century the manor had passed into the Denys family, the most notable holder being William Denys (1470–1533). After the family accumulated debts in the 16th century, the manor was sold to the Wynter family and then the Blathwayte family, who built the present mansion known as Dyrham Park, which is said to incorporate some of the structure of the earlier manor house. 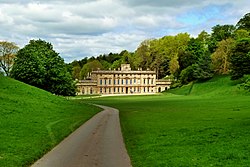