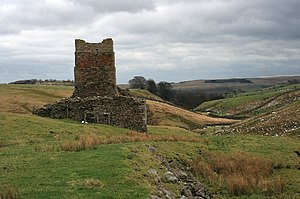 The Durham Dales extend over the greater part of western County Durham, where the Pennine Hills run through the county. Indeed, before the name "Pennines" was invented for the whole range of fells from south to north, they were known as the Durham Dales within County Durham.

The Durham Dales consist primarily of a series of high exposed moorlands, hills and mountains, a number exceeding a height of 2,000 feet above sea level, along with the valleys or dales, from which the area gets its name. These valleys include Teesdale and Weardale. The area covers roughly one third of County Durham and is its least populous area.

There are just a few market towns within the area—Barnard Castle, Consett, Middleton-in-Teesdale, Stanhope, Tow Law, and Wolsingham,—though some also consider the Durham Dales to extend as far East as Bishop Auckland and Crook.

There are a number of small villages in the area, which in general tend to be sparsely populated and spread out, in great contrast to much of the rest of County Durham.

Many of the high hills are occupied by moors with peat-mosses, the higher ground being uncultivable and barely fit for pastures.

As with much of the landscape of the Pennines, they are generally upland areas of high moorland indented by the more fertile valleys of various rivers and streams.

The Durham Dales constitute the principal source of the rivers of the county, and Durham's boundary with the neighbouring shires across the Pennines, Westmorland and Lancashire, is formed by the watershed of the hills. The southern boundary, with the North Riding of Yorkshire, is formed by the River Tees from its very source in these hills. The principal dales of the county are carved by such rivers, as Weardale by the River Wear.

Along the course of the Tees are the three attractions of the High Force, Low Force and Cauldron Snout waterfalls.