Dunbar Castle is the remnants of one of the most mighty fortresses in Scotland, standing in a magnificent ruin over the harbour of the town of Dunbar, in East Lothian.

The Votadini or Gododdin, are thought to have been the first to defend this site and its name in the old British language, Dyn Barr ("Fort of the Point") has remained the name of the town, Dunbar. By the 7th century, Dunbar Castle was a central defensive position of the Kings of Bernicia, an English kingdom that later became part of the larger Kingdom of Northumbria.

During the Early Middle Ages, Dunbar Castle was held by an Ealdorman owing homage to the King of the Northumbrians. It is recorded in Old English as Dynbær at this time. In 678 St Wilfrid was imprisoned at Dunbar, following his expulsion from his see of York by Ecgfrith of Northumbria.

Later, Dunbar was said to have been burnt by Kenneth MacAlpin, King of the Scots. Certainly he is on record in possession of the castle.[1]

Kingdom of the Scots

The English lands north of the Tweed were ceded to the King of Scots in the tenth century. During the 10th and early 11th century the Norsemen made increasing inroads in Scotland, and in 1005 there is record of a Patrick de Dunbar, under Malcolm II, engaged against the Norse invaders in the north, at Murthlake, a town of Marr, where, alongside Kenneth, Thane of the Isles, and Grim, Thane of Strathearn, he was slain.[1]

The first stone castle is thought to have been built by Gospatric, Earl of Northumbria, after his exile from England, following the Harrowing of the North, by William the Conqueror. Gospatric took refuge at the court of Malcolm III of Scotland. Gospatric was a powerful landowner in both kingdoms and could summon many men, which encouraged Malcolm to give him more lands in the Merse and Lauderdale, as recompense for those lost further south and in return for loyalty as is usual under the feudal system. (Sir Walter Scott argued that Cospatric or Gospatrick was a contraction of Comes Patricius.) In any case, King Malcolm III is recorded as bestowing the manor of Dunbar &c., on "the expatriated Earl of Northumberland".[1]

The body of buildings measured in excess of one hundred and sixty five feet from east to west, and in some places up to two hundred and ten feet from north to south. The South Battery, which Grose supposes to have been the citadel or keep, is situated on a detached perpendicular rock, only accessible on one side, seventy two feet high, and is connected to the main part of the castle by a passage of masonry measuring sixty nine feet. The interior of the citadel measures fifty four feet by sixty within the walls. Its shape is octagonal. Five of the gun-ports remain, which are called the 'arrow-holes'. They measure four feet at the mouth and only sixteen inches at the other end. The buildings are arched and extend eight feet from the outer walls, and look into an open court, whence they derive their light.[2] 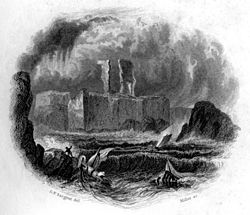 19th-century engraving of the castle

About the middle of the fortress, part of a wall remains, through which there is a gateway, surmounted with armorial bearings. This gate seems to have led to the principal apartments. In the centre, are the arms of George, 10th Earl of Dunbar, who succeeded his father in 1369, and who besides the earldom of Dunbar and March, inherited the Lordship of Annandale and the Isle of Man from his heroic aunt, Black Agnes of Dunbar. The graven arms must have been placed there after his succession, as he was the first who assumed that shield.

The castle towers had communication with the sea, and dip low in many places. Northeast from the front of the castle is a large natural cavern, chiefly of black stone, which looks like the mouth of the Acheron – a place that leads to melancholy streams. This spot is supposed to have formed part of the dungeon where prisoners were confined, such as Gavin Douglas, Bishop of Dunkeld, who was a prisoner here in 1515. There is, however, also a dark postern which gives access to a rocky inlet from the sea, and it seems probable that it was through this that Sir Alexander Ramsay and his followers entered with a supply of provisions to the besieged in 1338.[2]

It was long said the castle was invulnerable, possibly because of the many sieges it sustained. The castle was built with a red stone similar to that found in the quarries near Garvald. Large masses of walls, which have fallen beneath the weight of time, appear to be vitrified or run together. In the north-west part of the ruins is an apartment about twelve feet square, and nearly inaccessible, which tradition states was the apartment of Mary, Queen of Scots.[2]

The Castle remained the stronghold of the Earls of Dunbar until the forfeiture of George, Earl of March, in 1457, when the Castle was dismantled to prevent its occupation by the English. It was restored by James IV later in the century. The castle came under the control of the Duke of Albany and it was during this period that the bulwark to the west was built. It may have been designed by Antoine d'Arces, Sieur de la Bastie who was placed in charge of the castle in December 1514.[3] Albany organised further repairs and amendments in July 1527.[4] A Italian drawing for a fortification of this period by Antonio da Sangallo the Younger, marked as an opinion for "il Duca D'Albania," has been associated with Dunbar.[5]

The castle was burnt in 1548 by the Earl of Shrewsbury on a punitive raid during the Rough Wooing.[6] Further re-fortifications in 1548 were directed by Piero Strozzi and Migiliorino Ubaldini.[7] The English soldier Thomas Holcroft described the activities of Peter Landstedt, a lieutenant of the German mercenary Courtpennick (Konrad Pennick), on 24 September 1549. Despite cannon fire from the castle, Landstedt got a foothold in a house in Dunbar, and used the furniture to start fires in the town. Landstedt planned to make an entrenchment in front of the castle to place his guns, and he thought the walls of the castle near the town were "very old and low," and now "revised with earth and mounds", these old walls being stone on the natural rock. He thought the old high walls of the inner court could be broken by bombardment to destroy the "first walls" of the castle. These plans were not realised.[8]

In May 1560 an Italian engineer was working on further improvements for the French garrison.[9] These works were inspected by Robert Hamilton in Briggs, keeper of Linlithgow Palace and Master of the Royal Artillery, and Robert Montgomery in July 1560 on behalf of the Lords of the Congregation who reported that it was "more ample by the double than it was of before" and capable of holding 500 more soldiers. The new work was immediately demolished as a provision of the Treaty of Edinburgh. Local landowners were tasked with the demolition of part of a "rampire," a rampart with its ditch and counter scarp, and a great platform for artillery. However, the French captain of the Castle, Corbeyran de Sarlabous refurbished the cavern which was within the area scheduled for demolition.[10]

The Castle remained garrisoned by 60 French troops under the command of Sarlabous until September 1561.[11] In August 1565, during the rebellion against Mary, Queen of Scots called the Chaseabout Raid, she ordered repairs to the gun emplacements and artillery, and hand tools that might be needed to re-build the ramparts during a siege.[12]

Dunbar Castle was finally slighted by order of the Parliament of Scotland in December 1567, following the debacle at Carberry Hill and a siege in September to eject the followers and kinsmen of the Earl of Bothwell.[13] Dunbar and the fortress on Inchkeith were to be "cast down utterly to the ground and destroyed in such a way that no foundation thereof be the occasion to build thereupon in time coming."[14] In September 1568 some of stone was selected for reuse at the quayside of the Shore of Leith.[15]