Dun Rig is a hill amongst the Manor Hills, part of the Southern Uplands. It reaches 2,441 feet feet and is the county top of Selkirkshire.

Dun Rig is a hill of two summits and two counties. Each of its summits forms a turning point on the boundary between the two shires of Selkirk and Peebles, while the saddle between them is left to Selkirkshire alone standing across the gap between a northern spur of that county (Upper Glen Sax) and its main body.

The hill is at the head of Glen Sax and its slopes the source of the Glensax Burn, though waters from Dun Rig flow in each direction towards the River Tweed northwards and the Douglas Burn south, down through woods to the Yarrow Water.

The name "Dun Rig" ("brown ridge") is a common one in the Middle Shires, but that at the head of Glen Sax is the best known.

On John Thomson's Atlas of Scotland (1832) the two peaks of Dun Rig are named as "Blackcleuch Head" and "Blackhouse Heights". The Black Cleugh is a burn which runs southeast form the slopes of this Blackcleugh Head; now better known as Dun Rig Main Top. 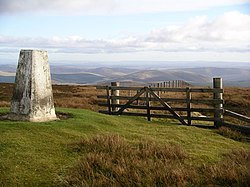