Difference between revisions of "Dexthorpe" 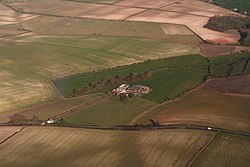 Dexthorpe is the site of a deserted mediæval village in Lindsey, the northern part of Lincolnshire. It is situated in the parish of Dalby, three and a half miles north from Spilsby, a mile south-west of Ulceby, and 400 yards east of the A16 road.

Dexthorpe is listed in the 1086 Domesday Book as part of the Candleshoe Hundred in the South Riding of Lindsey. It held 23 households, 8 villeins, 11 smallholders and 47 freemen, with 16 ploughlands, 2 churches and 80 acres of meadow. Before the Conquest, Earl Harold held the Lordship, and by 1086 it had been granted to Hugh d'Avranches, 1st Earl of Chester, who also became Tenant-in-chief.[1]

However, by 1577 Dexthorpe had declined and was recorded as having only a pasture, church and parsonage.[2][3]

In 1829, Edmund Oldfield wrote in his book A topographical and historical account of Wainfleet in the Wapentake of Candleshoe in the County of Lincoln, that "the inhabitants of Dexthorpe pay church rates to the incumbent of Well", and that the number of inhabitants in Dalby and Dexthorpe in 1801 were 50, in 1811 there were 71 and by 1821 had risen again to 99.[4]

Today the church and village are visible as earthworks.[2][5]