Darfield is a village and ancient parish in the West Riding of Yorkshire. The village is situated approximately four miles east from Barnsley town centre. Darfield had a population of 8,066 at the 2001 UK Census,[1] increasing to 10,685 at the 2011 Census.[2]

Roman coins have been unearthed in Darfield, and there is evidence to suggest that the village contained Roman habitation during its history.

In Saxon, the name "Feld" describes 'a large area of pasture land' , while the term "Dere" refers to the deer which inhabited the forest. When combined, this gives the name Derefeld which later became Darfield.

There are records of an 8th-century church in Darfield, but when the Domesday Book was written in 1086 there was no mention of it.

Darfield remained an insignificant agricultural village for many centuries to come, until 1862. In that year, two mining companies sank shafts in the Barnsley district to exploit the rich seam of coal running through the area. Darfield Main colliery and Mitchell's Main were local mines, the population of the village quickly increased and it became a labour pool for the surrounding coalmines.

Until June 1963, Darfield had a railway station on the Sheffield - Cudworth - Leeds line. The line itself closed in 1988 due to severe mining subsidence.

Darfield shops include a Co-op supermarket, a florist's, baker's, newsagent's, two hairdresser's, garage/MOT station, a post office, greetings card shop, and a hardware & homeware shop. Two village chemists are based inside the local doctors' surgery and on Snape Hill Road. Food outlets include two Indian restaurants (formally The Bridge Inn and The Station public house) two takeaway cafes, two fish and chip shops, a Chinese takeaway and a pizzeria. Four pubs still survive in the village; Cross Keys, Queen Victoria the Darfield and the Sportsman Inn. There are also two clubs; the Village club and the Conservative club. The cricket club also has a bar. 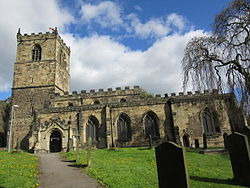 Darfield is the home to the Maurice Dobson museum which is divided into four parts: the main museum, an outlet area where local people can sell their craft items, a cafe/gallery, and a meeting place.[3] There is also an outdoor patio where some larger items are exhibited. The museum's property was donated to the village by Maurice Dobson, after whom the museum is named. There is also a small village public library. Religion is served by an Anglican parish church and two Methodist chapels.

Ebenezer Elliott, the Corn Law Rhymer, is buried in Darfield All Saints churchyard.

Bus services are provided every 15 minutes to Barnsley Interchange as well as two buses per hour to Wombwell. Darfield is also served by the express bus service X19 which operates direct to Doncaster Frenchgate Interchange. Also, both Wombwell and Goldthorpe railway stations are within easy reach of Darfield where connections can be made to Sheffield, Meadowhall, Wakefield and Leeds.

Darfield has a cricket club which plays at Darfield Cricket Ground and a junior football team which is Darfield JFC, they have played on the Longbow playing fields former Darfield Foulstone School Fields for the last 21 years.

The village has had a team play in the FA Cup before - Darfield F.C. Its nearest professional football club is Barnsley F.C.