Cutsdean is a small village in the Cotswolds, in a small detached part of Worcestershire (one unaffected by the Counties (Detached Parts) Act 1844) locally situate in Gloucestershire. It is found alone on a lane five miles east of Tewkesbury.

The River Windrush rises just north of the village and its young stream runs down through Cutsdean.

The history of the village can be traced back to the Anglo-Saxon period. King Offa of Mercia grantes the village to the minster of Bredon and later it became a possession of Worcester Priory.

The parish church is St James. 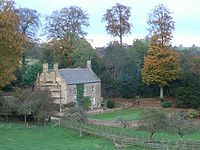