Difference between revisions of "Cumbernauld"

Cumbernauld is a new town in the easterly, detached part of Dunbartonshire. It was created in 1956 as a population overspill for the City of Glasgow. It is the eighth most populous settlement in Scotland.

The town may be new but its name is old, coming from the Scottish Gaelic Comar nan Allt, which means "The Meeting of the Waters'" for it is the watershed between east and west, place where streams flow west into the Clyde and east into the Forth. Cumbernauld was long a trysting place for cattle drovers and a staging-post for changing horses between Glasgow and Edinburgh.

Cumbernauld's history stretches to Roman times, with a settlement near the Antonine Wall. The Antonine Wall was built be order of the Emperor Antoninus Pius and was the furthest, most northerly boundary of the Roman Empire. The security that the wall gave from possibly hostile tribes to the north probably allowed the foundation of a settlement. A rural population grew in the area where Cumbernauld's housing estates now stand, with the centrepoints being the 18th century Cumbernauld House, built close to the site of the mediæval Cumbernauld Castle, and Cumbernauld Village nearby.

Until the reign of King David II, the barony in which Cumbernauld lies was part of Stirlingshire, but Malcolm Fleming, Sheriff of Dumbarton, prevailed upon the King to exchage various parished between the two shires, and in thus the land came to Dumbartonshire.[1]

Cumbernauld House stands on the site of the old Cumbernauld Castle, first built as a Norman-style motte and bailey. Owned by the Comyns, it was situated at the east end of the park, where the motte (mound) is still visible. The Fleming family built their castle where the house now sits. One original wall can be seen in the allotment area. The castle played host to the royalty of Scotland, including Mary Queen of Scots, who visited the castle and planted a yew tree at Castlecary Castle, only a mile or two away, which still grows there. Sadly, the roof of the great hall collapsed while the queen was staying there, and although she was not hurt, she visited the relatives of those who were injured or killed in the village below.

Royalty often visited the town to hunt the mysterious Scottish ox, or white cattle, which roamed in the woods around Cumbernauld. These woods were a surviving fragment of the ancient Caledonian Forest, in which the oxen abounded. Cumbernauld House was designed by William Adam and is currently unoccupied. The old grounds are used today as a park, known as Cumbernauld Park. A mining and quarrying industry flourished after the construction of the Forth and Clyde Canal, notably at Auchinstarry Quarry which is now a popular location for climbing and abseiling, and at Glencryan, where the old clay mine and its associated structures are still clearly visible.

Weaving was an important part of the town's industry before the Industrial Revolution, when all the work of that kind moved to neighbouring bigger towns such as Glasgow.[2]

After the Second World War, Glasgow was suffering from chronic shortages of housing and poor housing conditions, particularly in areas such as the Gorbals. As a direct result the Clyde Valley Regional Plan 1946 allocated sites where satellite new towns were to be constructed to help alleviate the problem through an overspill agreement.[3] Glasgow would also undertake the development of its peripheral housing estates. Cumbernauld was designated a new town in 1955.

The development, promotion and management was undertaken, until 1996, by the Cumbernauld Development Corporation (CDC), a quango appointed by the Secretary of State for Scotland.

Cumbernauld is the most clear example of a modernist new town vision in the UK.[4] Housing was originally delivered through constructing a series of satellite neighbourhoods which were clustered around the hilltop town centre. Separation of people and cars was a major element of the first town masterplan and this was carried through for much of the development of the town. Cumbernauld pioneered designs for underpasses and pedestrian footbridges as well as segregated footpaths. Early neighbourhoods were designed by the CDC and were constructed at Kildrum, Cumbernauld Village, Seafar, North Carbrain and Greenfaulds. Other neighbourhoods were later developed at Condorrat, South Carbrain and Abronhill. Much of the housing of these areas won awards for their innovative designs.

During its construction, under the designer's eye of Geoffrey Copcutt, Cumbernauld town centre's daring megastructure architecture was highly praised. Architects, designers, town planners and students of many disciplines visited Cumbernauld from around the globe to marvel at the town, for many years heralded as a utopian construction.

When originally designated a New Town the target Population was 50,000. Then in the 1961, only five years after becoming a new town, the Area to the north of the A80 was included in the town's area with new planned neighbourhoods at Balloch, Dullatur, Westerwood and Eastfield. As a result, a revised target population of 70,000 was predicted. However, only now is the population starting to climb above 50,000, but this is expected to increase substantially with 2,100 houses being built between 2001 and 2008.

After the creation of the new town, diverse industries such as high-tech, electronics, and chemical and food processing became large employers, along with the government tax collection office, now HM Revenue and Customs. The main industrial estates were developed to the east and west along the A80 at Castlecary, Wardpark and Westfield. Areas at Luggiebank and South Carbrain to the south of the town have also been developed for industry. 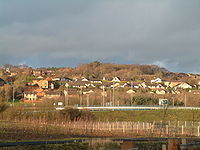 Since then, the outlook has changed dramatically and the New Town has won a number of very unflattering awards including the "Plook on a Plinth" in both 2001 and 2005.[5] In December 2005 the entire Town Centre won a public nomination for demolition in the Channel 4 series Demolition, where it was voted "the worst building in Britain".[6] As a result of this, it was featured in 2003 on the BBC Radio 2 comedy programme It's Been a Bad Week, where it won the show's fictional "Worst Week of the Week Award, Awarded Weekly, on a Week-By-Week Basis." In 2003.

The intended core of Cumbernauld remains the Town Centre buildings, all of which is essentially contained within one structure, segmented into "phases", the first of which was completed in 1967, the latest of which began construction in May 2003 for completion around September 2004. Initially the basic groundwork for the new shops began in 1997 and were finally completed in summer 2007. Designed to be a commerce centre, an entertainment and business venue and a luxury accommodation site, it was widely accepted as Britain's first modern-style shopping mall and was the world's first multi-level covered town centre.[7] However, the town never developed to its planned size, and the town centre has never had the life envisaged by town planners. Wealthy occupiers for the centre's penthouses never materialised and some now lie empty and derelict. Further expansion has been primarily to provide further space for shops. A substantial portion of the original Shopping Centre was demolished due to structural damage and has been redeveloped as a new shopping and leisure complex.[8]

As well as the unfulfilled ambitions for the town, the passage of time has exposed serious defects in post-war concepts of centrally-planned retail and civic centres developed in the absence of proper community consultation or sensitivity to local environmental and economic conditions. This has been reflected in a country-wide backlash against modernist architecture in general. Cumbernauld's Town Centre is widely regarded as one of the ugliest and least-loved examples of post-war design in Scotland. The confusing layout is an abiding source of frustration for both visitors and residents, many of whom are the descendants of skilled workers who aspired to escape the frequently appalling social and housing conditions of the Glasgow conurbation in the 1960s and 1970s. 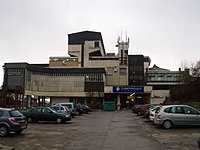 Despite its bad press, from a purely aesthetic standpoint Cumbernauld is regarded as representing a significant moment in town design, and in 1993 it was listed as one of the sixty key monuments of post-war architecture by the international conservation organisation DoCoMoMo.

The residential structure of Cumbernauld is noteworthy in that there were no pedestrian crossings, whether zebra or pelican crossings, nor traffic lights —pedestrians cross roads by bridge or underpass. This remained the case until a set of traffic lights were erected in the Condorrat Village neighbourhood Main Street, soon followed by traffic / pelican lights which were erected beside the new Tesco Extra, opened January 2004. This has led to the suggestion that the town is car-centric, and difficult to navigate by foot.

The town has a reputation as grim and isolating, and has below-average house prices for the region despite above-average income and below-average unemployment and child poverty rates. However, the town's housing is well planned and generally of high quality, making it a source of local civic pride in stark contrast to the town centre megastructure. House price imbalances across central Scotland mean that large family homes of 4 bedrooms and above are available for occupancy in Cumbernauld at prices and rents often half that of equivalent or less salubrious dwellings in the nearby centres of Glasgow and Stirling. Unfortunately the ideals of the 1960s were never realised and half of the New Town was never built.

There are currently about 17 churches in the town.