The County of Cromarty is a shire of the Highlands of Scotland, and certainly the most unusual in form. Cromartyshire consists of a number of physically-separated areas scattered across Ross from the east to the west coast. As Cromartyshire and Ross-shire are thoroughly interlaced, it is common to consider the geography of Cromartyshire and of Ross-shire together, the two being in practical terms inseparable.

Cromarty is the county town. It stands on the Black Isle on the North Sea coast, while the county's largest town, the fishing village of Ullapool, stands on the Atlantic coast. With just under seven thousand residents, Cromartyshire is the least-populous county in the United Kingdom.

The county's highest point is Sgùrr Mòr in the Fannichs, standing at 3,642 feet.

The greatest freshwater lochs of Cromartyshire are in its mountainous regions. The largest is Loch Fannich, under the shadow of the mountains of the same name, but which is shared with Ross-shire. In the Coigach area, in the far north-west, 243 feet above the sea, lies Loch Sionascaig, wholly in Cromartyshire and a loch of such irregularity of outline that it has a shore-line of 17 miles. It contains several wooded islands, and drains into Enard Bay by the River Polly.

The arrangement of scattered parcels as one shire arises from the seventeenth century and the influence of George Mackenzie when the sheriff of Cromarty in 1685 and 1698. An influential man in the court in the days of King Charles II, James VII and William and Mary, he owned several estates in Cromartyshire as it was and in Ross and he sought to bring them together into one county, which was duly enacted. Mackenzie was later ennobled as Earl of Cromartie.

Cromartyshire consists of twenty-three separated portions. Other counties with some detached parts have a main body of the county and detached parts nearby and in following that practice it is usual to consider the principal portion to be that containing the county town, Cromarty, but this is not the largest portion of the county but the second-largest, and is just one-sixth the size of the largest portion, the district of Coigach in the north-west.

The parts of Cromartyshire (with Ordnance Survey numbering and grid references) are: 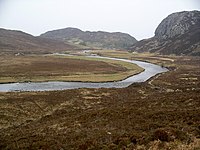 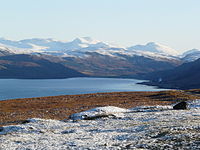 These estates which together are Cromartyshire are spread from the east coast to the west and deep inland, with a fine variety among them. The "old shire" around Cromarty is the northern part of the Black Isle, the low-lying, broad peninsula of the gentle east coast, and like it are the lands of on the Nigg peninsula to the north; Tarbat, Tarrel and Cadboll along the North Sea coast and the pockets east of Tain around Plaids and Cnocan Mealbhain on the beautiful Dornoch Firth and Knockbreck and Inver inland but barely raised from the sea; this is a land of small farmsteads.

In contrast is Coigach, a high, mountainous district on the wild western coast. The west coast is cut with deep sea-lochs, and Cromartyshire's parts lie along the loch shores and along the Gruinard River as it makes its way from the lochs in the mountains down to Gruinard House on the shore.

Two further parcels lie in Strathcarron, inland and upstream on the south bank of the River Carron and reaching up into the hills. (Gruinards Lodge and Wester Gruinards bear witness to the common ownership of these estates with that of the western coast.)

Other parts are lands more of the mountains: Fodderty itself is relatively low-lying, close to Ross-shire's county town, Dingwall, but its parish reaches high into forested hills, while the Fannichs and Loch Fannich itself, are bleak, mountain fastness and of that sublime beauty for which the Highlands are known. The Fannichs lie on the watershed between east and west, while to the north-west the estate attached to Inverbroom provides some more of such dramatic Highland scenery.

Thus Cromartyshire, though a mixed up, bizarre county as mapped, samples some of the best of all of the landscapes of ancient Ross.

The name of Cromartyshire comes from its county town, Cromarty on the tip of the Black Isle, whose name is from the Gaelic language but of uncertain origin, probably with the element crum meaning "crooked" and interpreted variously as "crooked bay" or the "bend between the heights".

Cromartyshire itself is an ancient shire, which was a hereditary sheriffdom in the family of Urquhart of Cromarty. In the latter part of the 17th century the sheriffdom was obtained by Viscount Tarbat, afterwards Earl of Cromartie, who was a most influential man at court and in Parliament in the reign of William and Mary. In 1690 at his instance several detached districts were annexed to the shire by authority of Parliament; consisting of all the lands in Ross-shire which were then owned by him, his mother or his mother-in-law.[1] Thus an incomprehensible county was created, which if nothing else is a lesson in not letting politicians get their hands on geography.

The ancient sheriffdom, or old shire, comprises Cromarty parish and the greater part of Resolis parish.[2]

The shire has developed on both coasts. On the North Sea coast, on the Cromarty Firth is Cromarty whose port was formerly used by ferries, to export locally-grown hemp fibre, and by trawlers trawling for herrings. The port was a base for the Royal Navy during the First World War.

On the Atlantic coast, Ullapool on Loch Broom was founded as a herring-fishing port in 1788 by the British Fisheries Society. The town was designed by Thomas Telford.