From Wikishire
Revision as of 17:24, 7 August 2014 by Owain (Talk | contribs)
(diff) ← Older revision | Latest revision (diff) | Newer revision → (diff)
Jump to: navigation, search
Not to be confused with Covington, Lanarkshire

Covington is a village in Huntingdonshire, in the southwest of the county close by the borders with Bedfordshire and Northamptonshire. It is within the Leightonstone Hundred.

The village has ancient roots, the earliest signs being a moat from an early building which survives and the 12th century church.

The parish church is All Saints, though there has been a great deal of debate over the years as to whether it is properly named "All Saints" or "St Margaret". The Victoria County History entry for Covington says:

The dedication is commonly supposed to be to St. Margaret, but ancient wills conclusively prove it to have been to All Saints.

The church is still called St Margaret's in some quarters locally and the name is most certainly St Margaret's on some old maps. If the dedication refers St Margaret of Scotland, King Malcolm III's English queen, it may be connected to their descendants' inheritance of the Earldom of Huntingdon, though we may never know. Nevertheless, the name of All Saints is the prevailing usage today.

The view from the South-East corner of the Churchyard is locally considered to be one of the best in Huntingdonshire, with a fine view down the valley towards the villages of Tilbrook and Kimbolton, the church towers of which can be clearly seen.

The church was first built in the 12th century, possibly on an Anglo-Saxon foundation, but only the nave now remains. The chancel was rebuilt around 1300 and early in the 14th century a chapel was added on the south side of the nave. This chapel was demolished and the connecting arch blocked at some time in the 15th century. The tower was probably built around 1330 but was considerably altered around 1500. There is some evidence that the tower once had a spire. Recent research suggests that the spire fell down during the Great Storm of 1703. A long stainless steel pin has recently been inserted to help stabilise the tower. Restoration took place in 1882-3 and the south wall of the chancel was rebuilt in 1911. The current 3-bell frame is due to be replaced in 2013-14 by a new 4-bell frame, slightly lower in the tower, perhaps including a fourth bell.

Covington has a small Village Hall which was founded as the village school, built by public subscription in 1876, but later taken over by the local council. The school closed in 1949 and the building became the village hall and soon the home of the Covington and Tilbrook Women's Institute and the Village Social Club.

The Hall decayed through lack of maintenance and in the late 1990s a committee was formed to look into its restoration, without which the hall would have to be pulled down. The hall is now completely modernised and is regularly used for village meetings and events. 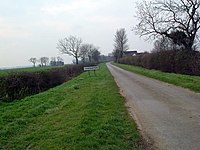