The County of Laois otherwise Queen's County is a shire in the province of Leinster, Republic of Ireland. The population of the county is 80,559, according to the 2011 census - 20% higher than it was in the 2006 census, which is the highest percentage population growth in the country. 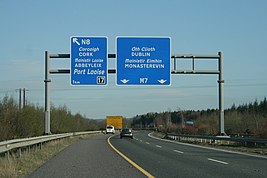 The M7 near Portlaoise

Laois is the 23rd largest of Ireland’s 32 counties in area and also 23rd largest in terms of population.[1] It is the seventh largest of Leinster's 12 counties in size and tenth largest in terms of population. The county is landlocked and, uniquely, does not border any other county which touches the coast. It is therefore considered to be "the most landlocked county in Ireland.",[2] although County Roscommon is the geographical centre of Ireland.

There are nine baronies in the county: 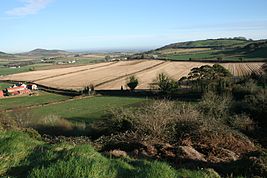 The weather station at east Durrow was set up in May 2008. The equipment used is a Davis Vantage Pro II that measures temperature, humidity, wind speed, wind direction, rainfall and barometric pressure. This data is transmitted every 2 seconds to a website where the data can be freely accessed. The station also reports to the Irish Weather Network which displays live weather data from similar stations all around Ireland.

The first people in Laois were bands of hunters and gatherers who passed through the county about 8,500 years ago. They hunted in the forests that covered Laois and fished in its rivers, gathering nuts and berries to supplement their diets.

Next came Ireland’s first farmers. These people of the Neolithic period (4000 to 2500 BC) cleared forests and planted crops. Their burial mounds remain in Clonaslee and Cuffsborough.

Starting around 2500 BC, the people of the Bronze Age lived in Laois. They produced weapons, tools and golden objects. Visitors to the county can see a stone circle they left behind at Monamonry, as well as the remains of their hill forts at Clopook and Monelly. Skirk, near Borris-in-Ossory, has a Bronze Age standing stone and ring fort. The body of Cashel Man indicates that ritual killing took place around 2000 BC.

The county name derives from Loígis, of which the modern county is only a part. In the 11th century, its dynastic rulers adopted the surname Ua/Ó Mórdha. They claimed descent from a member of the Red Branch Knights.

The next stage is known as the pre-Christian Celtic Iron Age. For the first time iron appeared in Ireland, as factions fought bloody battles for control of the land. At Ballydavis, archaeologists have discovered ring barrows that date from this time period.

By the first century AD, the western half of Laois was part of the Kingdom of Ossory under Mac Giolla Phadraig rule. The eastern half of the county was divided roughly into seven parts, which were ruled by the Seven Septs of Loígis: O’More (O’Moore), O’Lalor, O’Doran, O’Dowling, O’Devoy (O’Deevy), O’Kelly and McEvoy. 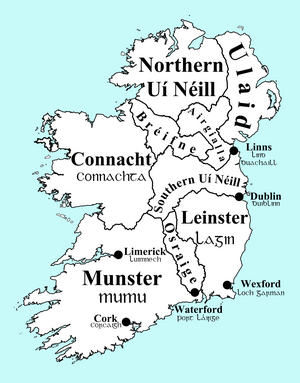 Map of Ireland around AD 900. The western third of Laois was part of the Kingdom of Osraige.

When Ireland was Christianized, holy men and women founded religious communities in Loígis. St Ciarán of Saighir (called "The Elder" to distinguish him from the younger St Ciarán of Clonmacnoise) founded his monastic habitation in the western Slieve Bloom Mountains as the first bishop of Ossory, reputedly before St Patrick. His mother Liadán had an early convent nearby at what is now Killyon. Between 550 and 600, St Canice founded Aghaboe Abbey and St Mochua founded a religious community at Timahoe. An early Christian community lived at Dun Masc or Masc’s fort, on the Rock of Dunamase.

The Synod of Rathbreasail that established the Irish dioceses was held near Mountrath in 1111, moving the Church away from its monastic base. As religious orders with strong ties to Rome replaced older religious communities, the wooden buildings of the early Christian churches in Laois gave way to stone monasteries. The Augustinians and Dominicans established themselves at Aghaboe Abbey, while the Cistercians took over an older religious community at Abbeyleix.

The Norman invasion of Ireland in 1169-71 affected Laois as it was a part of the Kingdom of Leinster. In Laois, the fortress on the Rock of Dunamase was part of the dowry of the Irish princess Aoife, who was given in marriage in 1170 to the Norman warrior Strongbow. Advancing Normans surveyed the county from wooden towers built on top of earthen mounds, known as mottes. They also built stone fortresses, such as Lea Castle, just outside Portarlington. Several of the county’s towns were first established as Norman boroughs, including Castletown, Durrow and Timahoe.

From 1175 until about 1325, Normans controlled the best land in the county, while Gaelic society retreated to the bogs, forests and the Slieve Bloom Mountains. The early 14th century saw a Gaelic revival, as the chieftains of Loígis caused the Normans to withdraw. The Dempseys seized Lea Castle, while Dunamase came into the ownership of the O’Mores. Examples of tower houses built by Irish chieftains are found at Ballaghmore and Cullahill Castle, both decorated with Sheila-na-gigs.

In 1548, English warriors confiscated the lands of the O’Mores, and built “Campa,” known as the Fort of Leix, today’s Portlaoise. 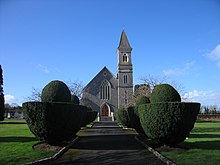 A church in Emo

It was shired in 1556 by Queen Mary as Queen's County, covering the countries of Leix (Loígis), Slewmarge, Irry, and that part of Glimnaliry on the south-west side of the River Barrow.[3] Laois received its present Irish language name following the Irish War of Independence. Laois was also sometimes spelt "Leix". Portlaoise (previously Maryborough) is the county town.

Loígis was the subject of two Plantations or colonisations by English settlers. The first occurred in 1556, when Thomas Radclyffe, 3rd Earl of Sussex dispossessed the O'Moore clan and attempted to replace them with English settlers. However, this only led to a long drawn-out guerilla war in the county and left a small English community clustered around garrisons. There was a more successful plantation in the county in the 17th century, which expanded the existing English settlement with more landowners and tenants from England. Neither plantation was fully successful due to a lack of tenants and because of continuous raids and attacks by the O'Moores.

In 1659, a group of Quakers settled in Mountmellick, while a group of Huguenots were given refuge in Portarlington in 1666 after their service to William of Orange in the Williamite War in Ireland.

What followed was a period of relative calm. Anglo-Irish landowners enclosed the land and built fine houses, including Durrow Castle, Heywood House and Emo Court. In 1836, a branch of the Grand Canal stretched to Mountmellick, further stimulating industry in that town.

The Great Famine of 1845-49 devastated the county. The county’s workhouses could not cope with the number of destitute people seeking shelter. By the time the workhouse opened at Donaghmore in 1853, many of the poorest had emigrated or died.

The county's name was informally changed on establishment of the Irish Free State in 1922 -- formerly spelt as Laoighis and Leix the spelling eventually settled on Laois. Despite the county's name being upheld as Laois through the 2001 Local Government Act, no legislation was ever enacted explicitly changing the name from Queen's County. When land is sold in the county the relevant title deeds are still updated as being in Queen's County. 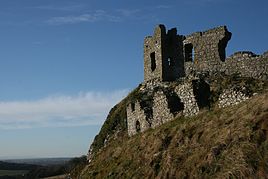 The population of County Laois is expanding rapidly, given its easy commute to the employment centres of Kildare and Dublin, and affordable housing in pleasant surroundings. Laois’s population growth during the period 2002-2006 (14%) has been stronger than the National average (8.2%),[4] as follows:[5]

Over 1,500 people work in the industrial sector in the county. Industrial parks are located in Portlaoise, Portarlington and Mountmellick. The county receives EU funding as it is part of the cluster of three regions (Border, Midland and West), colloquially known as "BMW", that qualifies for special funding aid.

Agricultural activities occupy approximately 70% of the land area of the county (460 sq. miles). However agriculture's share of income in the "BMW" region has declined sharply in the past decade, and represented only approximately 3.9% of annual income (GVA) in 2005 Central Statistics Office. There are over 230,000 cattle in the county - three for every person. The remaining area includes considerable stretches of raised bog and the Slieve Bloom mountains, which are partially covered by coniferous forest.

Iarnród Éireann train services along the Dublin-Cork line connect the county between Heuston station and Cork, Limerick, travel through the county, with railway stations at Portarlington, Portlaoise and Ballybrophy. From Portarlington trains run on the Dublin-Galway/Westport/Ballina line to Athlone as well as Galway, Westport and Ballina. From Ballybrophy trains run on the Ballybrophy line to Nenagh and Limerick direct.

The M7 motorway runs through County Laois. This is one of the busiest roadways in Ireland connecting Dublin and Limerick and acts as a trunk route for the M8 which connects Cork to Dublin. The M8 joins the M7 to the south of Portlaoise. Road infrastructure has improved greatly in the county over the past decade. Most major interurban routes through Laois have now been upgraded to motorway standard. All major traffic bottlenecks in Laois such as Abbeyleix and Mountrath have been bypassed following the opening of the M7/M8 tolled motorway project in May 2010. Both towns were major intercity bottlenecks for motorists especially Abbeyleix where delays of up to 30 minutes or more were common.