Difference between revisions of "County Durham"

The County Palatine of Durham is a shire of in the north of England. It is the only English county whose common name is prefixed with "County", as is more familiar in Ireland, rather than being suffixed with "shire".

The county is named after its county town, the City of Durham, which lies in the middle of the county. County Durham reaches from the North Sea coast up into the Pennines, separated from Northumberland to the north by the River Tyne and the Derwent and from the North Riding of Yorkshire by the River Tees from its source to its mouth.

Known as "the Land of the Prince Bishops", Durham has history forged by the troubles of the Middle Ages before it became reshaped by the industrial revolution. The county was a county palatine under the rule of the Bishop of Durham from the Middle Ages until the palatine jurisdiction was merged with the Crown in 1836.

The county is heavily urbanised on the coast, in particular around the mouths of the Rivers Tyne, Wear and Tees. The biggest towns are the City of Sunderland at the mouth of the Wear, Gateshead and South Shields on the Tyne and Stockton-on-Tees and Darlington on the Tees.

Durham's growth was driven by coal mining, iron mining and the industry they brought. From ancient days, "sea coal" has been collected where it is washed up on the sea coast[1], but more importantly in modern times have been the coal mines dug through the rich seams beneath the county. Since mining declined in the 1980s, County Durham has been promoted more as a tourist destination.[2]

The lands of County Durham were part of the Kingdom of Northumbria from its foundation until the viking incursions. At the height of Northumbrian power it becaome a centre of learning and ecclesiastical development, in particular at the Monasteries of Monkwearmouth and Jarrow, whose remains survive. The 7th century church at Escomb remains a complete example of a church from the high days of Northumbria.

In 866 Ivar the Boneless captured York and ended the Northumbrian kingdom. The lands north of the Tees were outside the immediate control of the Norse Kings of York, and place-name evidence suggests that County Durham was not settled by Scandinavians to the extent that Yorkshire was. 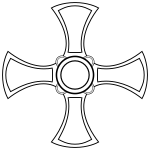 The lands that became County Durham were originally a liberty under the control of the Bishops of Durham. The liberty was known variously as the "Liberty of Durham", "Liberty of St Cuthbert's Land" "The lands of St. Cuthbert between Tyne and Tees" or "The Liberty of Haliwerfolc".[3]

The bishops' special jurisdiction was based on claims that King Ecgfrith of the Northumbrians had granted a substantial territory to St Cuthbert on his election to the see of Lindisfarne in 684. In about 883, a cathedral housing the saint's remains was established at Chester-le-Street and Guthfrith, the Norse King of York granted the community of St Cuthbert the area between the Tyne and the Wear. In 995 the see was moved again to the more defensive position of Durham.

After the Norman conquest, William the Conqueror reformed the Community of St Cuthbert, turning it into a purely monastic concern

A Norman army captured the City of Durham in 1069. There was a rebellion against the new Norman earl, Robert de Comines, who was killed. However, County Durham largely missed the Harrying of the North that was designed to subjugate such rebellions.[4]

The best remains of the Norman period are to be found in Durham Cathedral and in Durham Castle, also in some few parish churches, as at Pittington and Norton near Stockton. The Early English period is found the eastern portion of the cathedral, the churches of Darlington, Hartlepool, and St Andrew, Auckland, Sedgefield, and portions of a few other churches.

The machinery of government itself was slow to extend itself to northern England, and these lands were under constant threat of rebellion from displaced English thanes or of invasion from Scotland. In the twelfth century a shire or county of Northumberland was formed, but the authority of the sheriff of Northumberland and his officials was disputed by the bishops. The crown still regarded Durham as falling within Northumberland until the late thirteenth century. Matters came to a head in 1293 when the bishop and his steward failed to attend proceedings of quo warranto held by the justices of Northumberland. The bishops' case was heard in parliament, where he stated that Durham lay outside the bounds of any English shire and that "from time immemorial it had been widely known that the sheriff of Northumberland was not sheriff of Durham nor entered within that liberty as sheriff. . . nor made there proclamations or attachments".[5] The arguments appear to have been accepted, as by the fourteenth century Durham was accepted as a liberty which received royal mandates direct. In effect it was a private shire, with the bishop appointing his own sheriff.[3] The area eventually became known as the "County Palatine of Durham".

The division of the county into the four wards, Chester-le-Street, Darlington, Easington and Stockton existed in the 13th century, each ward having its own coroner and a three-weekly court corresponding to the hundred court in southern counties. The diocese extended (over County Durham and Northumberland, and was divided into the archdeaconries of Durham and Northumberland.

The term palatinus is applied to the bishop in 1293, and from the 13th century onwards the bishops frequently claimed the same rights in their lands as the king enjoyed in his kingdom.

The palatinate in the Middle Ages 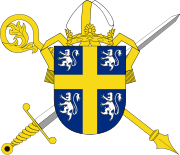 Arms of the Bishops of Durham

The county claimed a number of small exclaves within Northumberland in which the Bishop exercised jurisdiction by virtue of the connection of the parishes in question with the former see of Lindisfarne; Bedlingtonshire, Islandshire[6] and Norhamshire[7] within Northumberland. It also claimed Craikshire within the North Riding of Yorkshire, an estate granted to Bishop Wilfred in the late 7th century.

Until the 15th century the most important administrative officer in the palatinate was the Steward. Other officers were the sheriff, the coroners, the Chamberlain and the Chancellor. The palatine exchequer was organized in the 12th century. The palatine assembly represented the whole county, and dealt chiefly with fiscal questions. The bishops council, consisting of the clergy, the sheriff and the barons, regulated the judicial affairs, and later created Court of Chancery for the County.

The Prior of Durham ranked first among the bishop's barons. He had his own court, and almost exclusive jurisdiction over his men. There were ten palatinate barons in the 12th century, the most important being the Hyltons of Hylton Castle, the Bulmers of Brancepeth, the Conyers of Sockburne, the Hansards of Evenwood, and the Lumleys of Lumley Castle. The Nevilles owned large estates in the county. Raby Castle, their principal seat, was rebuilt by John Neville, 3rd Baron Neville de Raby in 1377.

King Edward I's quo warranto proceedings of 1293 showed twelve lords enjoying more or less extensive franchises under the bishop. The repeated efforts of the Crown to check the powers of the palatinate bishops culminated in 1536 in the Act of Resumption, which deprived the bishop of the power to pardon offences against the law or to appoint judicial officers. Moreover, indictments and legal processes were in future to run in the name of the king, and offences to be described as against the peace of the king, rather than that of the bishop. In 1596 restrictions were imposed on the powers of the chancery.

During the Wars of the Roses, Henry VI passed through Durham.

County Durham was denied representation in Parliament until the reign of Charles II because of its palatinate status. Under King Charles I in 1614, a bill was introduced in Parliament for securing representation to the county and city of Durham and the borough of Barnard Castle, but this was strongly opposed by the bishop, as an infringement of his palatinate rights and the bill failed. Cromwell's parliament of 1654 was the first to summon members from the county.

On the outbreak of the English Civil War, Durham inclined to support the cause of Parliament, and in 1640 the high sheriff of the palatinate guaranteed to supply the Scottish army with provisions during their stay in the county. In 1642 the Earl of Newcastle formed the western counties into an association for the king's service, but in 1644 the palatinate was again overrun by the Scottish army, and after the Battle of Marston Moor fell entirely into the hands of the parliament.

In 1646, Parliament declared the palatinate abolished and in 1649 abolished bishops. After the Restoration in 1660, all laws passed by Parliament without the King's assent were declared invalid and so the Palatinate was restored to the bishop. Indeed it continued with much the same power until 5 July 1836, when the Durham (County Palatine) Act 1836 vested the palatine jurisdiction in the crown.[8] However the Restoration Parliament did confirm the right of the county's freeholders to elect two members to Parliament and two further members from the City of Durham.

By the Reform Act of 1832 the county returned two members for two divisions, and the boroughs of Gateshead, South Shields and Sunderland acquired representation. The boroughs of Darlington, Stockton-on-Tees and Hartlepool returned one member each from 1868 until the Redistribution Act of 1885.

The coal and iron deposits of Durham became the focus of intense interest when the furnaces of the industrial cities grew hungry for coal and the forges sought iron. Over the course of the nineteenth century the coal mines in particular multiplies and new pit villages sprung up across the county.

Durham remained an intensive coal mining area until the international price collapse in the 1980s when many mines closed, the focus of the Miners' Strike of 1984-85.

The economic history of Durham revolves around the rise and fall of the mining industry. At its height, the mines employed almost the whole of the non-agricultural population, with large numbers of pit villages being founded throughout the county.

In the twelfth century, King Stephen is recorded as owning a mine in Durham, which he granted to Bishop Pudsey, and in the same century colliers are mentioned at Coundon, Bishopwearmouth and Sedgefield. Cockfield Fell was one of the earliest Landshale collieries in Durham. Richard II granted to the inhabitants of Durham licence to export the produce of the mines, and by the Victorian period, the majority was shipped from the Port of Sunderland complex constructed in the 1850s. The port was the largest in Durham and the fourth biggest in Britain.

Gateshead had a considerable tanning trade and in the nineteenth century, Sunderland became the world's largest shipbuilding town, constructing a third of Britain's tonnage.

In agriculture, mustard-growing is a local speciality. 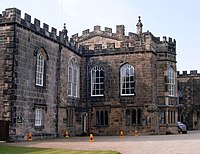