Counties of the Republic of Ireland 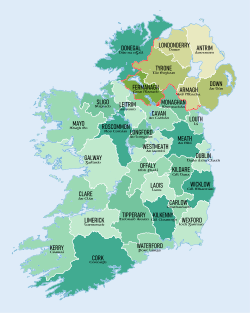 The Republic of Ireland has 26 counties. They are in essence a part of the system of counties which had been developed across the British Isles by the Middle Ages, and which are the oldest extant national divisions in the world.

Where a distinction has to be made with statutory "counties" so called for administrative purposes, the counties are variously known as historic counties, traditional counties or ancient or geographical counties[1].

All of the Irish counties have an existence stretching back to the Middle Ages. They have no administrative function, existing as geographical and cultural areas. In this time many activities many activities and much social understanding and local identity has grown up intertwined with the counties, and so they have become a vital part of Irish culture.

From the Middle Ages up to today, administrative functions have been carried on using the counties' boundaries or approximations to them, and so centuries of public records have been organised county by county, for which reason an understanding of the counties is vital for genealogical and historic research.

The following table lists the proper name of each county along with its area (in square miles), population, population density (in persons/square mile), the province in which it is located and a selection of its principal towns. County towns are listed first and cities are shown in bold.