Cotherstone is a village on the south side of Teesdale, in the North Riding of Yorkshire. Here the dale nestles within the Pennines.

Cotherstone cheese is a celebrated delicacy, and the village was famous for it by at least 1858.[1] 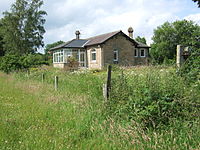 There was a railway station at Cotherstone on the now-closed Barnard Castle to Middleton-in-Teesdale line. The railway line crossed the River Balder at the Balder Viaduct just north of Cotherstone.

Hannah Hauxwell who became famous through a Yorkshire Television documentary, farmed near Cotherstone. The first documentary, Too Long a Winter was filmed in 1973.[2] In 1998 moved to the village itself.