Conisbrough Castle is a mediæval fortification in Conisbrough in the West Riding of Yorkshire. The castle was initially built in the 11th century by William de Warenne, the Earl of Surrey, after the Norman conquest of England in 1066. Hamelin Plantagenet, the illegitimate, parvenu son of Henry II, acquired the property by marriage in the late 12th century. Hamelin and his son William de Warenne, 5th Earl of Surrey rebuilt the castle in stone, including its prominent 92-foot-high keep. The castle remained in the family line into the 14th century, despite being seized several times by the Crown. The fortification was then given to Edmund of Langley, passing back into royal ownership in 1461.

Conisbrough fell into ruin, its outer wall badly affected by subsidence, and was given to the Carey family in the 16th century. Its derelict state prevented it from involvement in the Civil War of the 17th century and the remains were bought by the Thomas Osborne, 4th Duke of Leeds in 1737. Sir Walter Scott used the location for his 1819 novel Ivanhoe and by the end of the 19th century the ruins had become a tourist attraction, despite the increasing industrial character of the area.

The state took over the management of the property in 1950, but by the 1980s the visitor facilities were felt to be unsuitable, leading to a three-way partnership being created between the local council, English Heritage and a local charitable trust to develop the castle. The keep was re-roofed and re-floored in the 1990s with the help of European Union funding. English Heritage took over control of the castle in 2008 and continue to operate the property as a tourist attraction.

The castle is made up of an inner and an outer bailey, the former surrounded by a stone curtain wall defended by six mural towers and the castle keep. The inner bailey would have included a hall, solar, chapel and other service buildings of which only the foundations survive. The design of Conisbrough's keep is unique in England, and the historians Oliver Creighton and Stephen Johnson consider it an "architectural gem" and "one of the finest examples of late Norman defensive architecture". The keep comprises a circular central tower with six massive buttresses; its four floors would have included a main chamber and a private chamber for the lord above it. Although militarily weak, the design would have been a powerful symbol of Hamelin Plantagenet's new social status as a major lord. 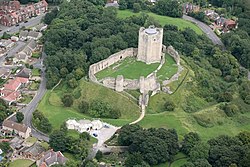 Conisbrough Castle was founded by William de Warenne, the first Earl of Surrey, who had taken part in the Norman conquest in 1066: he was richly rewarded by his father-in-law, William the Conqueror, with extensive estates in Yorkshire, Norfolk and Sussex.[1] As part of these, Earl William was given the manor of Conisbrough, which had previously been owned by the late Harold Godwinson.[1] The manor took its name from the Anglo-Saxon name for the settlement, Cyningesburh, meaning "the king's fortress", and formed a large estate comprising 28 townships, centred on an Anglo-Saxon fortified burh at Conisbrough itself.[2][3]

William built his castle on a rocky Magnesian Limestone spur surrounded by steep banks, and the fortification included a motte, an inner bailey protected by an earth bank and palisades, an outer bailey, and possibly a timber keep.[4] The castle was located around 175 feet above the river and would have dominated this part of the Don Valley. It was positioned directly opposite the village, which had probably contained the old Anglo-Saxon burh.[5]

The castle was held by William's son, also called William, from 1088 to 1138, and then by his son, another William, until his death in 1147.[6] Conisbrough and the earldom then passed through Isabel, William's daughter, to her first husband, William de Blois, and then onto to her second husband, Hamelin, whom she married in 1163.[7] Hamelin was the illegitimate half-brother of King Henry II, who had arranged the marriage, and the union brought him great wealth.[8] Hamelin extensively rebuilt the castle around 1180 to 1190, including constructing the stone keep; given his parvenu status, he probably hoped to reinforce perceptions of his new elevated rank.[9] King John visited the castle in 1201.[10]

The castle continued in the ownership of Hamelin Plantagenet's family, passing to his son William de Warenne in 1202.[10] William was probably responsible for the construction of new stone curtain walls around the inner bailey, destroying the former earthwork defences in the process.[11] The inner bailey was levelled and William built a hall and service buildings inside the castle, again in stone.[12] Conisbrough was inherited by William's young son John de Warenne in 1239, but he was still a minor and the castle was initially managed by his mother, Maud.[13]

Under John, Conisbrough's constables carried out a range of what the historian Stephen Johnson terms "colourful if rather unlawful dealings"; one was ultimately charged with having conducted "devilish and innumerable oppressions".[10] Further work was carried out in the castle during John's ownership, including modernising the castle hall and solar.[14]

The castle passed to John's grandson, also called John, in 1304, who married Joan de Barr.[10] The marriage broke down but John's attempts to gain a divorce in 1316 failed in the law courts.[10] John blamed Thomas, the Earl of Lancaster, for this and in response he kidnapped Thomas's wife; Thomas then retaliated by seizing Conisbrough Castle.[10] Edward II intervened in the dispute and confirmed Thomas as the new owner of the castle.[10] In 1322, however, Thomas rebelled against the King and was executed, resulting in Edward taking control of Conisbrough himself.[10] The King visited the castle in 1322, and spent 40 marks on repairing both Conisbrough and the neighbouring castle of Pontefract.[10] Edward was overthrown by his wife Isabella in 1326 and the castle was returned to John.[10] John had hoped to pass the property to his mistress and two illegitimate sons, but he outlived them and on his death in 1347 it reverted to the control of the Crown.[10]

Edward III gave the castle to his own son, Edmund of Langley, the Duke of York, who controlled it until 1402.[10] Edmund's eldest son, Edward, owned it until 1415, when it passed to Maud Clifford, the widow of Edmund's younger son Richard of Conisburgh, 3rd Earl of Cambridge|Richard, who lived there until 1446.[15] Richard of York, 3rd Duke of York|Richard of York then inherited the castle, and on his death in 1460 during the Wars of the Roses it passed to his son Edward, who seized the throne in 1461, bringing Conisbrough back into Crown ownership once again.[16]

By the 16th century Conisbrough Castle was in a poor state of repair, and a royal survey carried out in 1537 and 1538 showed that the gates, bridge and parts of the walls had collapsed in a spectacular land slippage, and that one floor of the keep had also fallen in.[17] The collapse of the walls was a consequence of the instability of the top soil on top of the limestone spur, which was a mixture of clay and sandstone; once the clay was washed away over time, the remaining sandstone proved extremely unstable and liable to crack.[18]

Henry VIII gave the ruins to the Carey family, who retained it until it passed by marriage into first the Heviningham and then the Coke families.[19] The castle was not involved in the events of the Civil War in the 17th century, and escaped the slighting that affected many similar properties, probably because the collapse of the outer walls had already made it indefensible and of little military value.[16] In 1737, after the death of Edward Coke, the castle and the surrounding manor were bought by Thomas Osborne, the Duke of Leeds, for £22,500.[20]

In 1811 the novelist Sir Walter Scott passed by the castle and later used it as the location for his novel Ivanhoe, published in 1819.[21] Scott only had a partial view of the property from the road and the events portrayed in the novel, set at the end of the 12th century, are fictitious; Scott believed the castle to have been Saxon in origin, a view shared by many 19th century commentators.[22] Although the writer John Wainwright was still able to praise the "picturesque view" around the castle in 1826, the antiquarian Ecroyd Smith commented with concern in 1887 on the changing character of the location, in particular the factories that were growing up around the new railway line and the "murky atmosphere" the industrial works created.[23]

In 1859 Francis D'Arcy-Osborne, the Duke of Leeds, died, leaving Conisbrough to his nephew, Sackville Lane-Fox, the Baron Conyers.[20] The keep remained in good condition, but by 1884 it was apparent that repairs were needed and the antiquarian George Clark recommended urgent work to repair the stonework.[24] If finances allowed it, he also urged the reinstallation of a roof and wooden floors.[24] Limited repairs were subsequently approved by the trustees of Lord Conyers, although Clark's colleague, A. Ellis, expressed concerns that railings to protect the visitors who routinely climbed to the top of the keep had not been funded.[25] A reported £500 was spent by the trustees renovating the castle ruins, including the construction of a lodge in the outer bailey for the castle keeper, completed in 1885, and improvements to the footpaths.[26]

The inner bailey seen from the outer bailey

Conisbrough Castle was bought by the Conisbrough local council in the 1940s, who placed the castle into the guardianship of the Ministry of Public Works in 1949, but retained the freehold ownership of the land. Two sets of archaeological excavations were carried out on the site between 1967 and 1969, exposing the foundations of the buildings in the inner bailey, and then from 1973 to 1977, examining options for future visitor facilities.[27] By 1984, when the government agency English Heritage took over the management of the property, the condition of the visitor services was unsatisfactory and the industrial character of the surrounding area was discouraging tourists.

In response, English Heritage and Doncaster Council formed a three-way agreement in 1988 with the Ivanhoe Trust, a local charity designed to generate new employment in the region.[28] Under this agreement the trust would manage the site, English Heritage would maintain the historic fabric of the castle, while the council would construct a new visitors' centre. A new, controversial visitor's centre was built in the style of a collection of jousting tents, while the floors and roof of the keep were reinstalled between 1993 and 1995 with European Union funding, in an attempt to limit the erosion of the castle stonework.

Visitor numbers following the investments fell far short of expectations, however, and by 2006 had settled at around 30,000 each year, only slightly above the level in the early 1980s.[29] The external facilities did not age well and funding shortages led to the new audio-visual effects in the keep being turned off to save money.[30] Discussions between the three partners about the future of the castle took place, but relations broke down and English Heritage resumed the direct management of the castle in 2008.[31]

The castle was closed for a £1.1 million programme of renovations in 2013, funded by the Heritage Lottery Fund, as part of which a new visitors' centre and visitor facilities were constructed. The castle is protected as a Grade I listed building and as an Ancient Monument.[32]

Plan of the Conisbrough Castle's keep