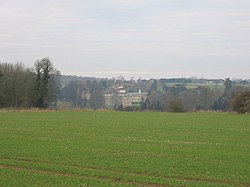 Compton Verney is a manor and parish in Warwickshire.[1]

The first record of a settlement at Compton Verney was the late Saxon village of Compton.It had good communications, being served by the Fosse Way, which ran north–south half a mile from the site and ran between the Roman towns at Cirencester and Leicester. By the time of the Domesday Book in 1086 the village was divided into two manors. The largest manor was held by the Count of Meulan, and this was inherited by the Earls of Warwick, who held it in the king’s name.

Some time before 1150, the manor was granted to Robert Murdac and the village became known as Compton Murdak, passing by inheritance to the heirs of the Murdak family. In 1370, after two hundred years of Murdak ownership, Sir Thomas Murdak surrendered the estate to Edward III’s mistress, Alice Perrers.

In 1435, it was acquired by Richard Verney (1435–1490) with the assistance of his younger brother John Verney, Dean of Lichfield, and the Richard Beauchamp, Earl of Warwick. The Verney family had begun acquiring lands in the area of Compton Murdak and the surrounding villages in the 1430s before purchasing the estate.

Around 1500, it was so closely associated with the Verney family that it began to be known as Compton Verney.

Richard Verney Esquire (afterward Knight)… built a great part of the House, as it now standeth, wherein, besides his own Armes with matches, he then set up…towards the upper end of the Hall, the Armes of King Henry the Sixth.[2]