Compton Beauchamp is a hamlet in western Berkshire, found 3 miles southeast of Shrivenham in the Vale of White Horse.

The village is at the foot of the Berkshire Downs and here there sweep down for the Downs the unusual Odstone Coombes, where the hillsides are as if engraved into waves across their face.

The parish includes the hamlets of Knighton and Hardwell. Nearby is the Iron Age hill fort of Hardwell Castle.

The parish church of Saint Swithun is distinctive 13th century church built of chalk.[1] The east window is a Decorated Gothic insertion and the north transept east window is early 14th century.[1] The font is a Perpendicular Gothic addition.[1] The painting on the chancel walls was executed by members of Vice-Chancellor Bacon's family, principally Lydia Lawrence [1].

The reredos, rood and altar rail were made by the artist Martin Travers[1] in the 1930s under the patronage of the banking heir and publisher, Samuel Gurney, who lived at the time in the Old Rectory.

Compton's name is derived from the Old English cumb meaning "rounded valley"; thus "valley farmstead" Its manor was held by the Beauchamp family in the 13th century, from whom comes the suffix.

The moated Compton Beauchamp House was the home of the King's Councillor, Sir Thomas Fettiplace, from about 1507. His only daughter, Elizabeth, the wife of Sir Francis Englefield, had no children and the property passed to her Fettiplace cousins who took little interest in the property. In 1589 it was sold to an in-law, Sir Henry Poole. The old house had deteriorated and Poole appears to have pulled it down and replaced it with the present house in about 1600. Early in the 18th century a fashionable Palladian facade was attached to the eastern entrance front of this small Tudor manor house. The house was rented in the later 19th century by Vice-Chancellor Bacon and in 1940 by Singer sewing machine heiress Daisy Fellowes. 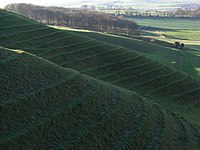