Coll is a small, peaceful island of the Inner Hebrides, lying to the east of the Isle of Mull. It forms a pair with the Isle of Tiree, lying off to the southwest. Quite unlike its mountainous near neighbour, Mull, Coll is a flat island: its highest point is Ben Hogh, at just 341 feet high.

The coast of alternates between the low Como storm battered cliffs and broad, sandy beaches, which rise to form large sand dunes.

The island of the population of fewer than 200 people, and the one village is Arinagour, which lies on Loch Eatharna, a deep, narrow sea loch in the middle of the south-eastern coast of the island. Here is the main ferry terminal, visited by ferries from Oban, Mallaig and Tiree. The loch at high tide has slipways access the local boats.

There is but one primary school, in Arinagour. Pupils progressing beyond must transfer to secondary school off the island.

The Isle is rich in wildlife, include corncrakes, rare elsewhere, amongst many species of birds and oil beetles. Project Trust, a conservation charity, sends many volunteers to the island each year, which provides employment for local people and much interest to the volunteers.

Historically the island belonged to a branch of the Clan Maclean, and their Castle, Breachacha Castle, stands on a low rocky promontory at the head of Loch Breachacha in the south west of the island.

The island's name appears to be from the Gaelic Cola meaning "Hazel". 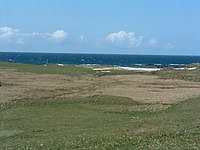 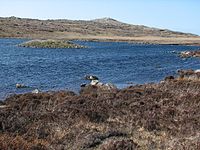 Coll is about 13 miles long by 3 miles wide and has a population of fewer than 200. Coll's sandy beaches rise to form large sand dunes. The highest point on Coll is Ben Hogh in the south west of the island which rises to a height of 341 feet.

The landscape of the island has much rough moorland, marked by many small lochans which are apparently the remnant scars of ancient glaciation. Some of the lochans have crannogs: artificial islands built in the midst of the water as defensive positions. Most notable of these is Dùn Amhlaidh on Loch nan Cinneachan.

Where there is extensive bare rocks, it bears the mark of being swept and scoured by the fierce winds for which the Hebrides are known. 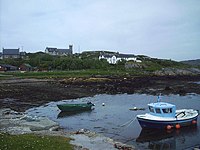 Hamlets across the island are:

The only roads of any size on Coll run west from Arinagour to Arileod and north to Arnabost, and along the northwest coast between Ballyhough and Sorisdale by way of Arnabost.

The world comes to Coll through Loch Eatharna, at the Caledonian MacBrayne terminal a mile south of Arinagour. Ferries ply between here and Oban, Tiree and Mallaig. The ferry between Oban and Castlebay on Barra goes by way of Coll and Tiree once a week.

Coll also has an airport ((IATA: COL)) found between Uig and Arileod. It has flights to Oban, Tiree and Colonsay, using a Britten-Norman BN2 Islander.

Coll was home to a branch of the Clan Maclean for 500 years, not all of which were peaceful. In 1590 the Macleans of Duart invaded their cousins on Coll with the intention of taking the island for themselves. A battle was fought at Breachacha Castle where the Coll clan overwhelmed the Duarts, chopped off their heads and threw them in the stream which is still known as "the stream of the heads". The Macleans of Coll retained their baronial fief and Castle of Breachacha until 1848 when Alexander Maclean of Coll emigrated to Natal, where he died unmarried.

The crannogs of the lochans are of unknown date. The best known, Dun Anlaimh, is thought to date to at least the later Middle Ages. Local tradition states that the dun was the fortress of a Norse chieftain who was defeated in battle by the Macleans. The legend is unproven, but the name means "Olaf's fort".

Breachacha Castle on the south coast dates from the 15th century. It was restored by the Project Trust,[1] An 18th century mansion house stands nearby.

The population of Coll was much higher in the past. In the late 18th century there were about 1,000 people supported by agriculture and fishing.[2] During the Highland Clearances of the 1830s and 1840s, half the population left, many of them moving to Australia, Canada or South Africa.

The Project Trust is gap year organisation that sends school leavers away for a year's voluntary work. They send 17-19 year olds on a whole year, often abroad, and have extensive selection and training weeks.[3] It was founded by Nicholas Maclean-Bristol and based on the island, has sent over 6,000 volunteers overseas, many of them gap year students. In 2008 this organisation, which brings over £370,000 per annum to Coll's economy, celebrated its 40th anniversary.[4][5]

There is an extensive RSPB reserve towards the west end of the island.[6] One of the main attractions is the rare corncrake. Traditional local farming practices have helped this once common British bird survive.

In 2010, a colony of short-necked oil beetles was found on the island. The beetle, thought to be extinct in the United Kingdom, is now known only to occur in southern Britain and Coll. It is parasitic on ground-dwelling bees, and is also flightless, begging the question of how it arrived on the island. It does not appear to be found on neighbouring Tiree, possibly because of a difference in terrain. Modern farming methods had partly caused its demise elsewhere.[7]

Many features of the island are familiar and to children as they have been portrayed in the delightful Katie Morag books by Mairi Hedderwick, who lives on the island are who both wrote and illustrated and books, and who has used Coll has the model for the Katie Morag's home, the fictional Isle of Struay.