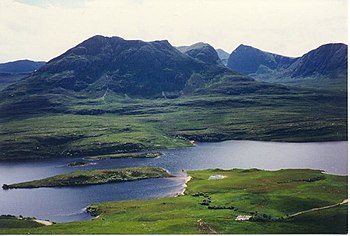 Coigach (Gaelic: A' Chòigeach) is a broad peninsula jutting into the Minch and forming the largest and most north-westerly part of Cromartyshire.

The meaning of the name A' Chòigeach is uncertain but Watson claims it means "the place of fifths", referring to a five-fold division of the land, and tradition makes the five-fifths of Coigach to have been Achnahaird, Achlochan, Acheninver, Achabhraighe, and Achduart.

Coigach is on the north-eastern shore of Loch Broom, with Ullapool at it foot, stretching north from there, Geographically it is part of Wester Ross, one of the more dramatically mountains parts of the Highlands. The Barony of Coigach also includes Isle Martin, the lands down to Corrie beyond Ullapool, the various farms of Strathkanaird, and eastward including the Forest of Achall and Rhiddorach. Coigach abuts Assynt in Sutherland further to the north.

Like its more northerly neighbour, Coigach is an area of astonishing but stark beauty, with mountains rising sheer to dizzying heights from quiet lochs. The highest summit is Ben Mor Coigach, at 2,438 feet.

View to the Coigach Hills

Achiltibuie and its smaller adjoining hamlets form the parish of Coigach, a traditional crofting and fishing community of a couple of hundred houses sprinkled between mountain and shore on a peninsula looking over the Summer Isles and the sea.