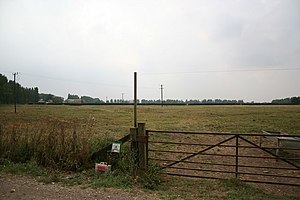 The site of the village, near Grange Farm

Coates is a deserted mediæval village in Lincolnshire, the site of which is by the hamlet of Coates-by-Stow, about two miles east of the village of Stow. The site is a scheduled monument.[1]

The village of Coates was recorded in the Domesday Book of 1086, having then six households. In the late 12th century, the church and land of the village were given to Welbeck Abbey in Nottinghamshire. The population of the village had increased by the early 14th century, but later in the century was reduced by the Black Death, and did not recover.[1]

Today at Coates-by-Stow there are two farms, a hall, several cottages and the Grade I listed Church of St Edith.[2][3] Mediæval ridge and furrow cultivation is discernible in the field immediately west of Grange Farm. In the adjoining field to the west are the earthworks of the village. There is a west–east roadway, shown by a ditch 470 yards long and about 2 feet deep; on both sides of this are rectangular ditched enclosures, where houses and outbuildings once stood. North of the northern range of buildings are indications of large rectangular enclosures, thought to have been mediæval paddocks; inside these can be seen the ridge and furrow pattern of earlier cultivation in that area.[1][3]

Further to the west, at SK908831 is an L-shaped water-filled depression about thirty yards west of the church, evidently the remaining part of a moat. It is thought that there was a group of buildings within the moat, extending over an area where Coates Hall and Hall Farm now stand. The site may have been a grange of Welbeck Abbey, established in the late 12th century, of which only the church, whose oldest parts date from that time, survives.[1][3]