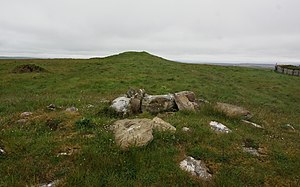 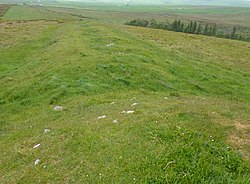 The Cnoc Freiceadain Long Cairns are two large Neolithic burial mounds, one known as Cnoc Freiceadain and the other as Na Tri Sithean, found near the hamlet of Shebster in Caithness, six miles west of Thurso (beside the A836 road).

The two cairns are found on the Hill of Shebster, to the north of the village. The hillside has a number of other ancient cairns in additions, and a stone row.

The Cnoc Freiceadain Long Cairns are in the care of Historic Environment Scotland, along with the Grey Cairns of Camster and the Cairn o' Get, and the site is open to the public.

The main cairn, Cnoc Freiceadain itself, is a chambered long horned cairn, turfed over, 220 feet long, with two horns at the north-eastern end stretching 18 feet and 30 feet further. The south-western end resembles a round flat-topped steep-sided cairn 8 feet high and 53 feet wide. Stones projecting from the cairn suggest a ‘peristalith’, a chamber, and cists or other structures.[1]

Na Tri Sithean is just 100 yards away, and is also a turfed, chambered cairn.