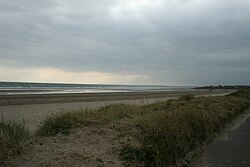 Clogherhead is a fishing village in County Louth. Located in a picturesque natural bay on the east coast it is bordered by the villages of Annagassan to the north and Termonfeckin to the south. with an administrative population per the 2011 Census of 3026, it is in the townlands of Clogher and Callystown, about 7½ miles north-east of Drogheda. As a seaside village its main industries are fishing and farming. In keeping with its links to the sea there has been an RNLI lifeboat stationed in the village for over 100 years. The current boat is a Mersey class lifeboat, the RNLB Doris Bleasedale, and is unique in Ireland being beach-launched. Following intensive lobbying by the local residents, fishermen and political representatives, Clogherhead now has one of the finest piers in Ireland which was opened following an investment in excess of €2 million.

The area boasts some of the finest countryside on the east coast and the headland has magnificent walk from the village along steep sea cliffs to the nearby picturesque harbour called Port Oriel. Standing on the headland and at the harbour offers breathtaking views of Ireland's east coast from the Mourne and Cooley Mountains in the north as far south as Lambay Island and the Rockabill Lighthouse.

The headland is also the sight of the Red Mans Cave, where Cromwellian soldiers are reputed to have put to death a number of Catholic Priests during the time of the Cromwellian Wars of 1649. The inside of the Cave has until recent times been repainted red to commemorate the event. However time and the forces of nature have made the cave largely inaccessible from land.

Buses linki the village to Drogheda, Duleek and Ashbourne. Most buses operate via Termonfeckin and Baltray though a few go via Grangebellew and Ballymakenny.[4] Drogheda railway station is approximately eight miles distant.

The village boasts two spectacular beaches. Port Beach in the center of the village is a Blue Flag beach with the Neptune watersports centre which is run by the local Council. In addition it is the location for the local RNLI lifeboat station which houses a Mersey class lifeboat, the Doris Bleasdale. The other beach is on the north of the village and is known as the 'Big Strand'. Both offer safe bathing facilities with a lifeguard on duty at the village beach during summer months.

There are three public houses in the village offering comfortable surroundings in which to while away the day and night. Music is available at weekends. The village offers a number of restaurants including La Pizzeria (Italian), the Little Strand Restaurant (Seafood and meat dishes), Great Wall Chinese Restaurant and Roberto's Take Away. All are located in the center of the village within easy walk of the village's other facilities.

Clogherhead has been used as a film location[8] for: