Clara is a small town on the River Brosna in County Offaly and is the 10th largest town in the midlands of Ireland. Clara had a population of 3,242 at the 2011 census, though a number of housing estates lie outside the town boundary making the actual population higher.

Clara is in the north of County Offaly near the border with Westmeath, on the R420 regional road, some 7.5 miles northwest of Tullamore. It stands on a plain, from which it takes its name: Clóirtheach means 'plain' or 'level place'. The town may be characterised as an urban centre surrounded by a series of small villages.

The town is connected to the River Shannon by one of its tributaries, the Brosna.

Clara is the modern name of what was known as the Barony of Kilcoursey.

The town as we know it today was established by Quakers in the mid-18th century. There is though evidence of community habitation for some time.

Situated on the Esker Riada, the ancient thoroughfare which connected the east and west coasts of Ireland, numerous ring forts are to be found in the countryside surrounding the town suggesting that the early settlement may have been an important staging post for travellers. Just outside the town in Kilbride, the remnants of a 12th-century monastery testify to the existence of a vibrant religious presence. According to tradition this monastery was founded by St Brigid of Kildare (d.c 525 AD) and is linked by an ancient road to Durrow Abbey founded by St Colm Cille (St Columba). St Brigid's original monastery, founded shortly after her religious profession – her first foundation, would have been constructed in wood and consisted of a number of buildings surrounding a central church. These buildings were replaced by stone structures in the 12th century. The original parish was named after St Brigid: Kilbride (from Cill Bhride: the Church of Brigid). The ruins of an ancient church are to be found not far from the monastery at the foot of a hill (Chapel Hill) and this may have been the original parish church.

Politically the family which had dominion over the area was the Sinnach O'Catharniagh (Fox O'Carney) clan; they were referred to as the Muinter Tadgain (people of Tadgain). The O'Catharniagh were princes of Teffia (an area in Westmeath). The ruins of their castle, Lehinch Castle, are to be found on a hill in Kilcoursey, less than a mile from the town centre. The McAuley family are also associated with the Barony of Kilcoursey. Mass rocks are also to be found in the hills outside the town, having provided secret places for Roman Catholics to worship during the persecution which followed the Reformation.

The Fox family formerly owned much of the district. In 1599, Hubert Fox, the local chieftain, submitted to Queen Elizabeth I and signed an agreement of "surrender and regrant" with the Crown to avoid the complete destruction of his estates following the Nine Years' War: by this grant, the lands were returned to Fox in recognition of his fealty. In the 1640-1, Hubert Fox’s son, also named Hubert Fox joined the rebellion of the Confederates, who claimed to act in the King’s name, in a fractious time, but when the Confederates were defeated in 1641, Fox fled his ancestral home, Lehinch Castle, with a price of 400 pounds on his head. No one turned him in.

Fox’s lands were eventually given to Samuel Rust, a Cromwellian soldier. Rust in turn, sold the district to two families – the Armstrongs and the Bagots.

The Armstrongs settled in the town and would eventually establish industries, notably a linen factory which proved quite lucrative. Andrew Armstrong (1727–1802) built Clara House on the west side of the town in the 1770s – a fine neo-classical building. Members of the Armstrong family distinguished themselves in other areas of life. One of them, John Armstrong, uncle of Andrew, was Governor of Menorca and author of a history of the island in 1752. Andrew Armstrong died in 1802 and the estates were sold to a Cox family, another family with notable connections.

In 1825, the Goodbody family moved to Clara from Mountmellick and introduced industry into the town, trading under the name of J & L F Goodbody. Buying flour mills at Erry and Charlestown, they developed the river Brosna and used it to harness power for their factories. In 1864 the Goodbodys started a jute factory at Clashawaun. The jute was imported from India and the resulting bags were exported worldwide. In the last decades of the 20th century the factories declined and the last Goodbody's factory closed in 1984. The family had provided the people of Clara with employment in a number of areas: factory work, domestic service and farming. Other industries in the town included flour mills, distilleries, a brewery, manufacturers of tobacco, soap, candles, and clothes together with food processing companies.

As the town entered a heyday at the end of the 19th and for much of the 20th centuries, its prosperity led to a number of building projects. Stately houses litter the town and surrounding countryside as the various members of the Goodbody family set up their households. 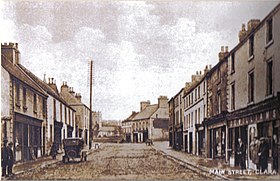 After the Roman Catholic Relief Act of 1829, a more prominent Roman Catholic church was built on the outskirts of the town, in Charlestown, but this proved too small and in the 1880s the parish, now St Brigid's Parish, built a fine neo-gothic church in the centre of the town on one side of the main square. To cater for the needs of the townspeople, two religious orders founded communities and schools: the Franciscan Brothers arrived in 1821 and the Sisters of Mercy some years later.

The town also has an Anglican church, also named St Brigid's, which looks down over the fair green and the Friends' Meeting Hall (Quaker) which is no longer in use. As the town prospered so did social life. Numerous cultural and sporting associations flourished in the town and continue to do so to this day.

A mile from the town centre lies Clara Bog, a raised bog which contains rare flora. It was considered for nomination as a UNESCO World Heritage Site.[1]

The Clara Bog visitor centre is located beside the town's library. A bog boardwalk (Accessible from Ballinough, off Tullamore road) is very popular with local walkers, but is virtually unknown to visitors. The board walk allows walkers to safely cross the surface of the bog. A much shorter, but more accessible bog boardwalk is also located 2 km from Clara on the main Rahan road.

The town has two swimming pools and a pitch and putt club. Clara's power lifting club has won a number of national and international awards. A golf driving range is located in the town also with the Esker Hills golf club located just outside the town. There is a local equestrian centre and sports centre also.