The County of Clackmannan (abbreviated Clacks.) is a shire in Central Scotland. It is the smallest county of the United Kingdom, reflected in its nickname; the wee county.

The county's name comes from that of its original county town, Clackmannan, which in turn takes its name from the Gaelic Clach Mhannainn meaning "Stone of Manau". Clackmannanshire's current county town is Dollar and its main town Alloa, where about half of the shire's population live. 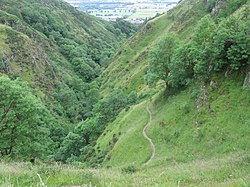 With just 35,160 acres (55 square miles), Clackmannanshire is the smallest county in the United Kingdom, but full of beauty.

The Ochil Hills lie in Strathdevon in the northern part of the county. These pretty hills are green with pasture, broken in places with jutting rocks and deeply indented ravines. Here are the greatest hills of Clackmannanshire, notably:

The county's main river, the River Devon rises on these hills.

South of the Ochils themselves, an elevated ridge starting on the west, runs through the middle of the county, widening gradually until it reaches the eastern boundary, and skirting the alluvial or carse lands in the valleys of the Forth and Devon.

The Ochils are noted for the number of their glens. Though these are mostly small, they are well wooded and picturesque, and those at Menstrie, Alva, Tillicoultry and Dollar are particularly beautiful.

The main rivers of the shire are the River Devon and the River Black Devon, or South Devon. The former is noted in the upper parts for its romantic scenery and its excellent trout-fishing and from its source in the Ochill Hills is flows 33 miles below the hills and down to the Forth at Cambus, though still just 5¼ miles from its source as the crown flies. Strathdevon is the lowland plain a few hundred yards either side of the River Devon, and this goes on to contribute to the formation the valley of the River Forth.

The Black Devon rises in the Cleish Hills and flows westwards almost parallel to that of the Devon. It reaches the Forth near Clackmannan.

The Forth is navigable as far as it forms the boundary of the county, and ships of 500 tons burden would once run up to Alloa. At the meeting of the Devon and the Forth there was small pier for portage to Dunmore pier and anchorage of smaller sailing ships, where others of more tonnage could be accepted at Dunmore pier on the opposite banks of the Forth.

The county's only lake is a man-made one: Gartmorn Dam, a mile long and half a mile broad.

The main industries are agriculture, brewing, and formerly coal mining. In 2006, permission was given for a waterfront development of the Docks area of Alloa, which has been in decline since the 1960s.

Alloa railway station reopened in May 2008. A new railway line connecting Kincardine and Stirling, reconnecting Alloa to the national rail network for the first time since 1968 was opened to the public. Passenger services only operate towards Stirling, the line to Kincardine is for freight trains only. An opening ceremony was held on Thursday 15 May, with the first fully functioning passenger service commencing in the new summer timetable on 19 May 2008.[1][2] The service provides an hourly connection between Alloa, Stirling and Glasgow Queen Street.

Clackmannan, the old county town, is named after an ancient stone suggested by some to be associated with a pre-Christian deity named Manau or Mannan[3] or with the tribe of the Manau Gododdin, best associated with the Lothians in the Dark Ages. The presumed original stone now rests on a larger stone beside the Tollbooth and Mercat Cross at the top of Main Street, Clackmannan.

Legend has it that Robert the Bruce mislaid his glove while in the area and, on asking where it was, was told "Look aboot ye". The county's coat of arms shows a pair of gloves. 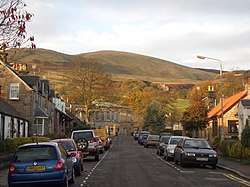 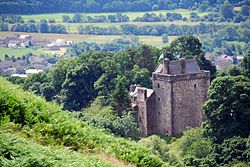