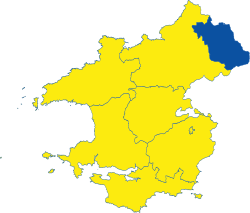 The Hundred of Cilgerran or Kilgerran is a hundred in the north of Pembrokeshire, named after the village of Cilgerran, which it contains. It is bounded by Cardiganshire to the north; by Carmarthenshire to the east and south; and by Cemais Hundred to the west. It is the least populous of the hundreds, with a population of 3,554 in 2011.

The hundred was formed in 1536 from the commote of the pre-Norman cantref of Emlyn and is otherwise called in the Welsh language Emlyn Is Cuch (Emlyn below the River Cuch),[1] with the addition of the Cemais parish of Llantood. The area of the commote was about 26,000 acres: that of the hundred is 28,000 acres.

It was under the control of the mediæval borough of Cilgerran. It was occupied by the Normans in the 12th century, and made part of the March, but remained exclusively Welsh-speaking. In addition to Cilgerran Castle, the Normans also constructed at least one other castle in the commote: Castell Chrychydd in Clydau.[2]