Cholsey is a village in Berkshire lying 2 miles south of Wallingford.

The village green is known as The Forty. Winterbrook, at the north end of Cholsey parish adjoins Wallingford, and is the site of Winterbrook Bridge across the Thames.

A Bronze Age site has been found beside the River Thames at Whitecross Farm in the northeast of the parish.[1] 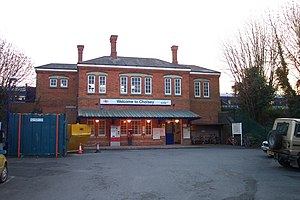 Cholsey is served by Cholsey railway station, a calling point for First Great Western stopping services on the Great Western Main Line between Reading and Didcot.