Difference between revisions of "Chichester Cathedral"

The church was founded as a cathedral in 1075, when the seat of the bishop was moved from Selsey.[1]

Chichester Cathedral has fine architecture in both the Norman and the Gothic styles, and has been called by the architectural historian Nikolaus Pevsner "the most typical English Cathedral".[2] Despite this, Chichester has two architectural features that are unique among the Church of England's mediæval cathedrals—a free-standing mediæval bell tower (or campanile) and double aisles.[3] The cathedral contains two rare mediæval sculptures, and many modern art works including tapestries, stained glass and sculpture, many of these commissioned by Dean Hussey.[1]

The city of Chichester, though it retains two main cross streets laid out by the Romans, has always been small enough for the city's entire population to fit inside the cathedral at once, causing Daniel Defoe to comment:

I cannot say much of Chichester, in which, if six or seven good families were removed, there would not be much conversation, except what is to be found among the canons, and the dignitaries of the cathedral.[4]

The spire of Chichester Cathedral, rising above its green copper roof, can be seen for many miles across the flat meadows of Sussex and is a seamark for sailors, Chichester being the only mediæval English cathedral which is visible from the sea;[3][5] (though since it was elevated to cathedral status in the 20th century, nearby Portsmouth Cathedral has that quality too.

Chichester Cathedral was built to replace the cathedral founded in 681 by St. Wilfrid for the South Saxons at Selsey. The seat of the bishop was transferred in 1075.[1] It was consecrated in 1108 under Bishop Ralph de Luffa. In 1187 a fire which burnt out the cathedral and destroyed much of the town necessitated a substantial rebuilding, which included refacing the nave and replacing the destroyed wooden ceiling with the present stone vault, possibly by Walter of Coventry. The cathedral was reconsecrated in 1199.[6][1]

In the 13th century, the central tower was completed, the Norman apsidal eastern end rebuilt with a Lady chapel and a row of chapels added on each side of the nave, forming double aisles such as are found on many French cathedrals. The spire was completed about 1402 and a free-standing bell tower constructed to the north of the west end.[6][1][7]

In 1262, Richard de la Wyche, who was bishop from 1245 to 1253, was canonised as Saint Richard of Chichester. His shrine made the cathedral a place of pilgrimage. The shrine was ordered to be destroyed in 1538 during the first stages of the Reformation. In 1642 the cathedral came under siege by Parliamentary troops.[1]

The towers at Chichester have had a particularly unfortunate history because of subsidence, which explains the positioning of the 15th-century bell tower at some distance from the cathedral. The south-west tower of the façade collapsed in 1210 and was rebuilt. The north-west tower collapsed in 1635 and was not rebuilt until 1901.[1] The masonry spire was built in the 14th century and was repaired in the 17th century by Sir Christopher Wren. It survived a lightning strike in 1721 and stood for 450 years before it telescoped in on itself on 21 February 1861, fortunately without loss of life. A fund was set up to raise the £48,000 needed for the rebuilding, and the contributors included Queen Victoria.[5] A replica of the old tower and spire, using the drawings of a previous resident architect, Joseph Butler, was rebuilt. The construction was raised by about 6.0 feet (1.8 m), by Sir George Gilbert Scott and was completed in five years.[8]

The tower and spire now rise to a height of 269 feet.[1][3] The rubble from the original spire was used to construct West Ashling Chapel.

Looking down the nave from the west doors 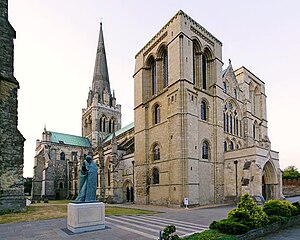 The west front and millennium statue of Saint Richard 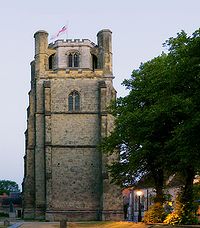 Typically for cathedrals of the Church of England, Chichester has had a long and varied building history marked by a number of disasters. The architectural history of the building is revealed in its fabric because the builders of different periods constructed in different styles and with changing technology. Both inside and outside portions of the original Norman cathedral can be distinguished from the later Gothic work by the massive construction and round-topped windows. Different Gothic styles from the late 12th century through to the 15th can also be identified.

The plan of Chichester is in the shape of a cross, with an aisled nave and choir, crossed by a transept. In typical manner, the eastern end of the building is long by comparison with the nave, is square ended and has a projecting Lady chapel, and typical also is the arrangement of paired towers on the western front, and a taller central tower over the crossing.[9] Its plan is unusual though in having double aisles.

Chichester has a cloister on the south side of the building.

Chichester is small for a Norman cathedral when compared with Winchester, Ely and Peterborough. Much of the original Norman construction remains in the nave, transept, crossing and adjacent bays of the choir. The elevation rises in the usual three stages of arcade, gallery and clerestory. It is similar to remaining Norman work at Winchester, where the arcade is proportionally low, and rests on solid piers rather than columns. In the gallery above, each wide space is divided into two by a colonnettes in a manner typical of Romanesque architecture.[3]

After the fire of 1187, the clerestory was rebuilt and the entire building given a ribbed vault. The eastern end was extended from the round ambulatory to form a square retrochoir or presbytery with lancet windows in a style that is transitional between Norman and Gothic. The newer arcades and the clerestory maintain the round arches of the earlier Norman architecture. The vault is in the Early English Gothic style, supported externally by flying buttresses and large terminal pinnacles at the eastern end. At this time the entire interior was refurbished, much of it being refaced with ashlar masonry. Each pier was decorated with delicate shafts of dark Purbeck marble with foliate capitals, contrasting with the squat cushion capitals of the limestone shafts. The entire program of work was probably directed by Walter of Coventry.[6] The nave was later divided from the choir by an elegant Perpendicular Gothic screen or pulpitum with three arched openings, called the Arundel Screen, which was removed in the mid 19th century but reinstated in 1961.[6][1][3]

The design of the central tower, faithfully reproduced by George Gilbert Scott, was of the Early English style, having on each side two tall pairs of openings, surrounded by deep mouldings.

The original spire, which also was of masonry rather than of sheathed wood, was built in the late 14th century, by John Mason (died ca 1403), who also built the Vicars' Hall.[6] The style and construction of the spire are obviously based on that of Salisbury Cathedral but it is not as ambitiously tall, probably because of the problem of subsidence.

The Lady chapel, constructed to the east of the retro-choir, is a long narrow space, with large windows in the Decorated Gothic style of the late 13th century.[6][1][3]

The other buildings related to the cathedral are the free-standing bell-tower of the early 15th century, probably the work of William Wynford who also designed the cloisters, with openings in the Perpendicular Gothic style.[6] St Mary's Almshouses in Chichester, which are linked to the cathedral, are a Christian charity dating from the 13th century. The mediæval Hospital, associated with the Alms House, is one of only two such buildings in the world, the other being in Germany.[10] 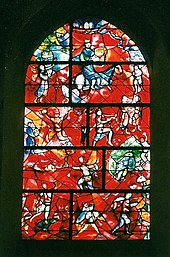 The cathedral has many treasures and artworks, the most precious being two carved reliefs dating from the 12th century which are of exceptional rarity among British sculpture.[1][3] Other ancient treasures include the remains of a Roman mosaic pavement, which can be viewed through a glass window, and a set of thirty eight mediæval misericords, dating from 1330, which remain beneath the seats of the choir, despite the fact other parts of the choir stalls being largely a Victorian reconstruction.[3]

Among the famous graves are those of the composer Gustav Holst and the Gothic "Arundel tomb", showing the recumbent Richard FitzAlan, 10th Earl of Arundel (1313–1376), holding hands with his second wife, Eleanor of Lancaster (1318–1372). The tomb was celebrated in the poem "An Arundel Tomb" by Philip Larkin. Leonard Bernstein composed Chichester Psalms for Chichester Cathedral.[10]

The cathedral contains many modern works of art, including tapestries by John Piper and Ursula Benker-Schirmer, a window by Marc Chagall, a painting by Graham Sutherland (Noli me Tangere), a sculpture and a font by John Skelton and a reredos for the St John the Baptist's Chapel by Patrick Procktor. Outside the cathedral stands a bronze statue of St Richard of Chichester by Philip Jackson.[10]

The Cathedral also contains a pennant presented to the Cathedral by Sir Francis Chichester, which hung on his ship when he circumnavigated the globe.

The music at Chichester Cathedral is largely led by the organ and the cathedral choir, as there are services daily and on special days in the calendar. Outside the regular services the cathedral also supports all kinds of music both religious and secular.

There has been organ music at Chichester Cathedral almost continuously since the mediæval period, with a break during the Commonwealth. There are now five pipe organs of different sizes and styles at Chichester Cathedral, with pipes of the Main Organ dating to the Restoration, the Hurd Organ to the late 18th century and the three most recent organs, the Nave Organ, the Walker Organ, which is a small portable organ in the Baroque style, and the Allen Organ, an early example of a digital electronic organ, dating to the late 20th century.

During school term the cathedral choir sing for eight services each week. As well as singing, choristers learn the piano and an orchestral instrument, spending at least eighteen hours a week on musical performance.[10]

Concerts and other music

There are visiting choirs who come from the diocese's parishes and elsewhere that sing in the cathedral from time to time. It is common for guest choirs to sing at Evensong during the week.[11]

The Royal School of Church Music hold some of their events in the cathedral, this includes the Diocesan Choir Festival when all the parish choirs of the diocese sing en masse in a service. To accommodate the large number of choristers, they are split over two succeeding Saturdays.[12] The music for the festival is currently directed by Charles Harrison.[12]

The cathedral hosts a variety of concerts, that along with those in the evening, includes a popular series of free ones, at lunchtime.[13] It provides a venue for visiting artists from across the world as well as those who are locally based, such as the Chichester Singers, who although an independent organisation, have "/since their formation in 1954, performed all their major concerts in the cathedral.[14][15]

The cathedral does not limit the music to just classical, it has hosted a performance by the rock band, Pink Floyd, who played at the funeral of their manager, Steve O'Rourke.[16]

Other performers, from the more popular end of the music spectrum, include Bob Geldof, Rolf Harris and The Hollies.[5]

The cathedral is a nesting site for peregrine falcons, which use a crenellated turret at the base of the spire. Three female and one male chicks were hatched in April 2009. During the nesting season live video of the chicks is shown inside the cathedral and on the website.[17][18]