Chelmsford is the county town of Essex. It was granted Letters Patent in 2012 to become a city, in celebration of Her Majesty's Diamond Jubilee of that year.

In the middle of Essex, Chelmsford is still part of the London commuter belt, equidistantly 32 miles between London and Colchester. Many commuters live in Chelmsford and take the daily train journey to Liverpool Street Station in London to work in the City of London financial sector, though Chelmsford is in itself a modern, well placed town with its own business community.

The main town is a small conurbation of the former parishes of Broomfield, Great Baddow, Moulsham, Widford and Springfield, including Springfield Barnes, now more commonly known as Chelmer Village.

The town's name is derived from 'Ceolmaer's ford' which was close to the site of the present High Street stone bridge. In the Domesday Book of 1086 the town was called 'Celmeresfort' and by 1189 it had changed to 'Chelmsford'.

Chelmsford sits on two rivers, the River Can and the River Chelmer, which flow separately into and through in the town centre, until the Can enters the Chelmer east of the town centre. The Chelmer then flows out towards Maldon to empty itself into tidal waters of the Blackwater Estuary. The Chelmer rises to the north near Thaxted while the Can begins in the west.

Until the 1960s these two rivers were prone to flooding the town centre area; particularly disastrous floods came in August 1888 (known locally as 'The Great Flood') and in September 1958 (which also badly affected nearby Wickford) causing widespread damage. Flood prevention schemes in the 1960s on both rivers have largely prevented any further incidents here although the natural floodplains to the north and east such as The 'Baddow Meads' and The 'Chelmer Valley' continue to see flooding on a regular basis especially after prolonged heavy rainfall.

Chelmsford Cathedral is the smallest cathedral in England after Derby Cathedral. It was built in the 15th and early 16th centuries, when it was the parish church of the prosperous mediæval town. The Diocese of Chelmsford was established in 1914 from part of the Diocese of St Albans. It covers all of Essex.

There are many churches in Chelmsford and from a wide variety of denominations. Those in the town centre include: 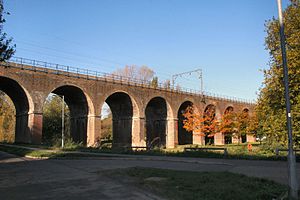 Neolithic remais and a late Bronze Age settlement have been found in the Springfield suburb but the town’s history begins with the Romans. The Romans built a fort here in 60 AD, and a civilian town grew up around it. The town was given the name of ‘’Caesaromagus’’ (“the market place of Caesar”), although the reason for it being given the great honour of bearing the Imperial prefix is now unclear; possibly it was intended as a planned town, even as a provincial capital to replace ‘’Londinium’’ or ‘’Camulodunum’’. The remains of a Roman mansio, a combination post office, civic centre and hotel, lie beneath the streets of modern Moulsham, and the ruins of an octagonal temple lie beneath the Odeon roundabout.

Chelmsford was refounded in the Anglo-Saxon period, falling within the Kingdom of the East Saxons; Essex. It takes its name from that time. An important Anglo-Saxon burial was discovered at Broomfield to the north of Chelmsford in the late 19th century and the finds are now in the British Museum. The road 'Saxon Way' now marks the site.

In 1199, King Richard I granted the Bishop of London a Royal Charter for Chelmsford to hold a market, and this marks the birth of the modern town. A covered market, operating Tuesday to Saturday, is still an important part of the town centre over 800 years later.

The town became the seat of the local assize during the early 13th century (though assizes were also held at Brentwood) and by 1218 was recognised as the county town of Essex, a position it has retained to the present day.

Chelmsford was significantly involved in the Peasants' Revolt of 1381, and Richard II moved on to the town after quelling the rebellion in London. 'The Sleepers and The Shadows', written by the late Hilda Grieve in 1988 using original sources, states: "For nearly a week, from Monday 1st July to Saturday 6th July [1381], Chelmsford became the seat of government ... The king probably lodged at his nearby manor house at Writtle. He was attended by his council, headed by the temporary Chancellor ... the new chief justice ... the royal chancery ... Their formidable task in Chelmsford was to draft, engross, date, seal and despatch by messengers riding to the farthest corners of the realm, the daily batches of commissions, mandates, letters, orders and proclamations issued by the government not only to speed the process of pacification of the kingdom, but to conduct much ordinary day to day business of the Crown and Government." Richard II famously revoked the charters which he had made in concession to the peasants on 2nd July 1381, while in Chelmsford. It could be said that given this movement of government power, Chelmsford for a few days at least became the capital of England. Many of the ringleaders were executed on the gallows at what is now Primrose Hill.

King Robert I of Scotland, better known as Robert the Bruce had close ties with the nearby village of Writtle and some argue that he may have been born at Montpeliers Farm in the village,[1][2][3][4] and possibly he has been conflated with his father, Robert de Brus, 6th Lord of Annandale.

In the 17th century many of the victims of Matthew Hopkins, the self-styled "Witchfinder General", spent their last days imprisoned in Chelmsford, before being tried at the Assizes and hanged for witchcraft.

During Second World War Chelmsford, an important centre of light engineering war production, was attacked from the air on several occasions, both by aircraft of the Luftwaffe and by missile. The worst single loss of life took place on Tuesday 19 December 1944, when the 367th V-2 rocket to hit England fell on a residential street (Henry Road) near the Hoffmans ball bearing factory and not far from the Marconi Wireless Telegraph Company factory in New Street which may also have been the target. (It is seen being protected by a barrage balloon in a wartime photograph.) Thirty-nine people were killed and 138 injured, 47 seriously. Several dwellings in Henry Road were completely destroyed, and many in nearby streets were badly damaged. A recently restored monument to the dead is in the borough cemetery in Writtle Road.

The GHQ Line part of the British hardened field defences of Second World War runs directly through Chelmsford with many pillboxes still stand to the north and south of the town. Faded camouflage paint still remains on old buildings near Waterhouse Lane.

Hylands Park, the site of the annual V festival, then hosted a Prisoner of war camp, and from 1944 was the headquarters of the Special Air Service (SAS).[5]

Since the 1980s Chelmsford has suffered from a decline in its defence-related industries, most notably The Marconi Company with all of its factories closing. However, the town's location close to London and at the centre of Essex has helped it grow in importance as an administrative and distribution centre. The one-time largest employer in Chelmsford, R.H.P. (the former Hoffman ball bearing manufacturing Company) closed its New Street/Rectory Lane site in 1989. Some of the factory remains and have been converted into luxury apartments and a health club although most of the site was demolished to make way for the Rivermead Campus of the Anglia Ruskin University

Beaulieu Park, 'The Village' and Chancellor Park are some of the most recent large scale housing developments built in the town to complement earlier developments such as Chelmer Village which was built throughout the 1980s.

Things to see around the town

Chelmsford Cathedral was originally called St Mary's Church. It became a Cathedral when the Diocese of Chelmsford was created in 1914. It is the smallest cathedral in England behind Derby Cathedral.

The Shire Hall stands at the top of the High Street is in front of the cathedral. A neo-classical, Georgian building with a Portland stone façade, it was opened in July 1791. The architect was a local man and the Essex County Surveyor, John Johnson. One of the oldest and most prominent buildings in Chelmsford, it was built as a courthouse, which it has remained to this day.

A Victorian railway viaduct of 18 arches spans the River Can in Central Park; one of three railway viaducts in the town that carry the Great Eastern Main Line. The Viaduct was constructed during 1842 by the Eastern Counties Railway Company and opened for passenger traffic on 29 March 1843.[6]

Chelmsford's two tallest buildings are Melbourne Court built in 1962 in Melbourne Avenue, locally known as Melbourne flats, and the new development completed in 2007, the 13-floor Kings Tower in Duke Street. They both stand at 141½ feet.

The former Chain Home radar tower in the urban village Great Baddow is the tallest structure by far in the Chelmsford area, standing at 360 feet. It originally stood at Canewdon but was reassembled in Chelmsford in 1959[7] and is the only Chain Home tower still in its original unmodified form in the Britain. It is a highly visible landmark throughout the town and surrounding area.

Chelmsford Prison is a male prison and Young Offenders Institution built in 1830. The 1979 film special of the TV series Porridge was filmed largely on location at Chelmsford Prison (while it was closed for repairs after a fire). The prison itself courted controversy for many years for its poor conditions, and was branded one of the worst gaols in the country by the Chief Inspector of Prisons in 2003.

Hylands House and Park' just to the west of the town is a country house and parkland, saved from dereliction and purchased by the local council in 1966 after the death of the last private owner. Much damaged by fire and vandalism by the time of the sale, the house has now been completely restored by Chelmsford Borough Council. The house dates originally from 1730, and the park, currently 574 acres, was landscaped by Humphry Repton. It is open to the public and used for a wide range of community events, including the annual music festival V Festival.

Chelmsford Museum in Oaklands Park, off Moulsham Street, is a local history and industrial heritage museum which also incorporates the Essex Regiment Museum. A major £5 million extension and redevelopment scheme opened in January 2010 and the museum now includes exhibits and interactive displays focusing on Crompton, Marconi, and Hoffmann, as well as illustrating the development of the town from prehistory up to modern times.[8] It also holds pottery including Castle Hedingham ware and the Turner Prize winner Grayson Perry. There is a live beehive and a collection of beautiful 18th century glasses. A second site at Sandon Mill, Chelmsford's former waterworks, displays further exhibits from Chelmsford's telecommunications, electrical engineering and rolling bearings industries.[9]

Hylands Park hosts the annual V Festival every penultimate weekend in August since 1996. The 21st World Scout Jamboree 2007 was also held at Hylands Park from 27 July to 8 August 2007.