The Borough of Charlemont is a village and townland in north-western County Armagh, beside the River Blackwater, which forms the county border with Tyrone to the west. Here Charlemont Bridge joins the villages of Charlemont on the east bank of the Blackwater and Moy on the Tyrone side, carrying the A29 road between Armagh and Dungannon.

The village had a recorded population of 109 people (in 52 households) at the 2011 Census.

In 1600, Charles Blount, 8th Baron Mountjoy was sent to Ireland as the last Lord Deputy of Queen Elizabeth I. He joined a group of mercenaries who had been fighting in the valley of the Blackwater. Mountjoy came to the place now known as Charlemont where he established a bridge of wood and a fort to guard the bridge in 1602. Before his founding of Charlemont Fort, the place had been called Achadh an Dá Chora, the 'Field of the Two Weirs', but it was renamed in his honour using his Christian name and the French word for hill, 'Mont', to produce 'Charlemont'. 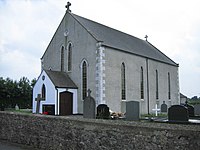 Charlemont remained a significant military post during the Stuart era, and was garrisoned by a detachment of the Irish Army. In October 1641 it was seized by rebels under the overall command of Sir Phelim O'Neill at the beginning of the Irish Rebellion of 1641. O'Neill may have captured a copy of the Great Seal of Scotland in Charlemont which he then used to produce a forged commission from Charles I, the Proclamation of Dungannon, ordering the Roman Catholics of Ireland to rise.

In 1650, Charlemont was besieged by English Parliamentarian forces during the Cromwellian conquest of Ireland. The English took the fort from its Irish Roman Catholic garrison under Sir Phelim O'Neill, despite taking heavy casualties. Charlemont was again an important post during the Williamite War in Ireland and its Jacobite garrison under Sir Teague O'Regan was placed under a lengthy siege until being forced to surrender to King William’s forces under Marshal Schomberg in 1690.